Though I have visited Newcastle many times before, those were during my student days and the only memories I have are of hazy nights out, great breakfasts, and some really embarrassing photographs. A few years older and wiser, Pablo and I were both really looking forward to see the city with less bleary eyes. 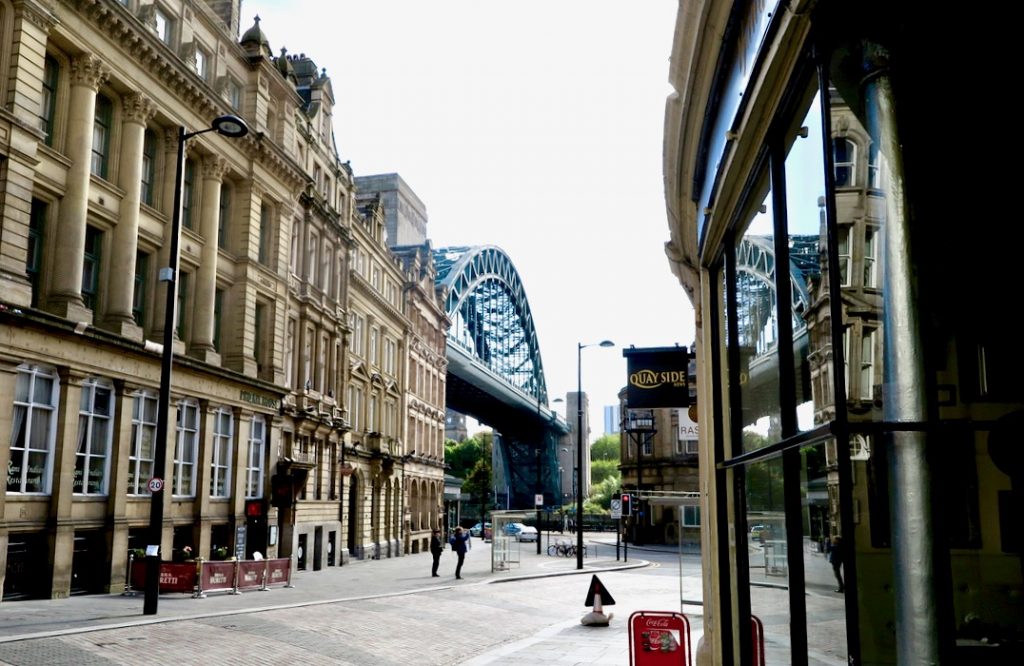 It had been 12 hours since we left the Isle of Lewis in the pitch dark and we were both exhausted by the time we arrived at the Newcastle Central Travelodge. After a speedy check in and finding our room for the night I could not resist a quick nap in the huge bed before getting ready to hit the Toon.

Feeling a little more alive, I delved deep into my bag to find the cleanest clothes I had left after a week on the road and shoved a quick face on. The room was so massive that I could make a mess and get myself glammed without disturbing Pablo who (as always) was working. 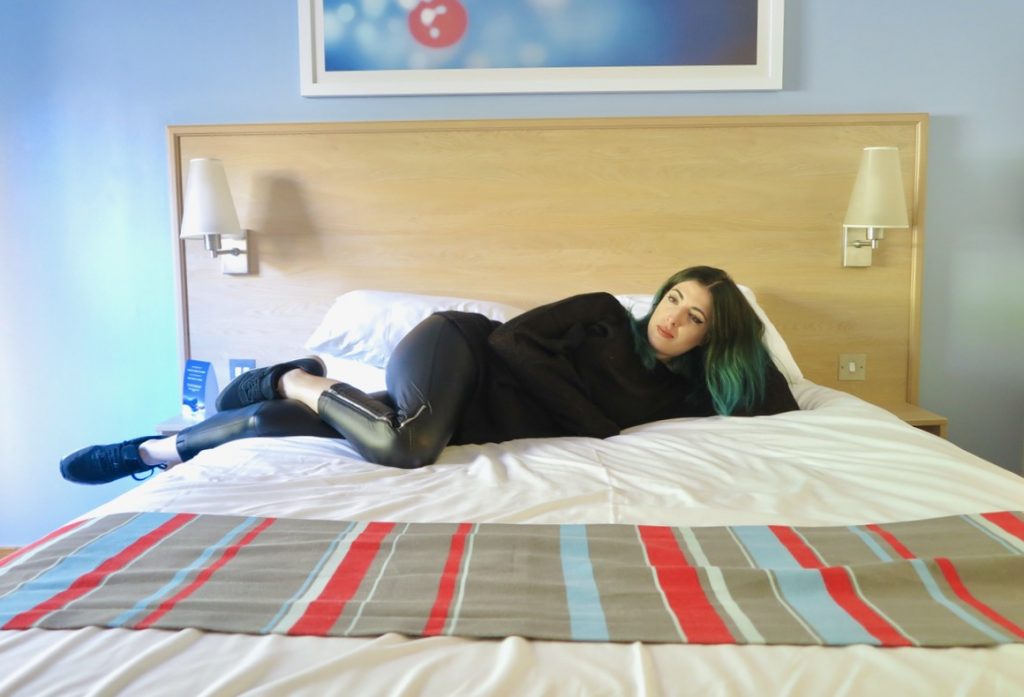 Our hotel was really centrally located and it was only a short 15 minute walk up to Central Station where we took a right up Pink Lane to grab dinner at Vegetarian restaurant/record store The Bohemian. 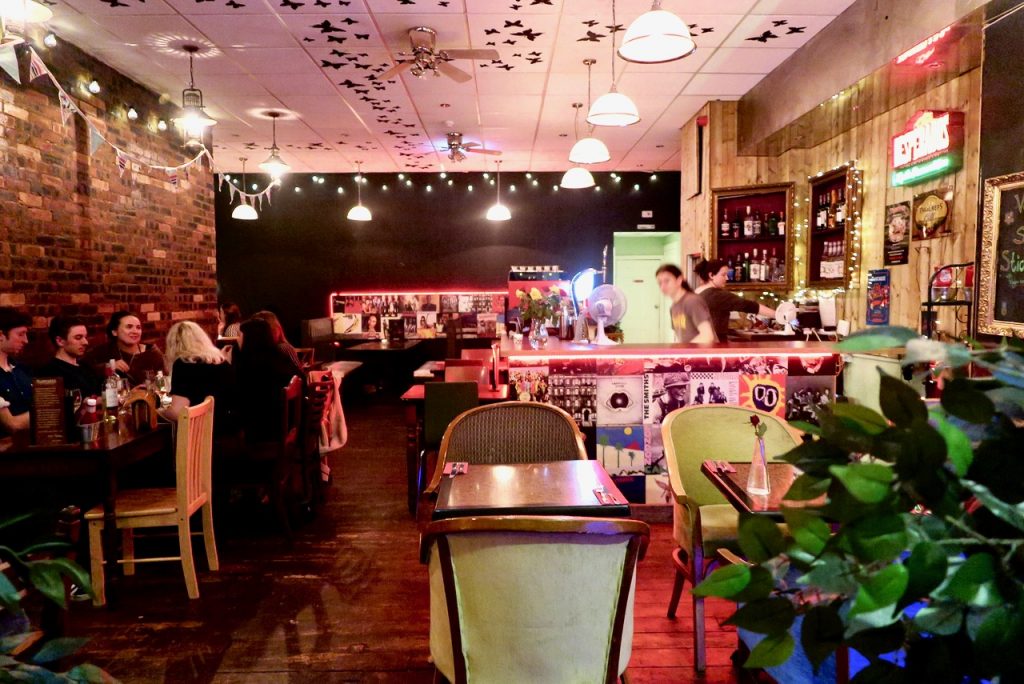 This place was not your average vegan friendly joint, offering up hearty food in a cool, low key environment. With fairy lights strung across the walls, mismatched furtive, and rock music playing quietly in the background, I felt right at home.

Pablo and I decided to stick with the rock theme, ordering Iron Maiden beer. Then, as usual, neither of us could make up our mind what we wanted so ordered a Tex Mex Pizza and Vegan Burger to share. The Pizza came with a deliciously tangy BBQ sauce base, torn up pieces of Jackfruit and just the right amount of jalapenos to add a kick. The bean burger came in a slightly toasted bun which held together well despite its slightly squishy texture. The burger had a decent smoky flavour but for me the real standout was the amazing vegan coleslaw.

After a decent meal and lovely serve I couldn’t resist rummaging through the records for sale and took home a copy of Motorhead’s Ace of Spades. 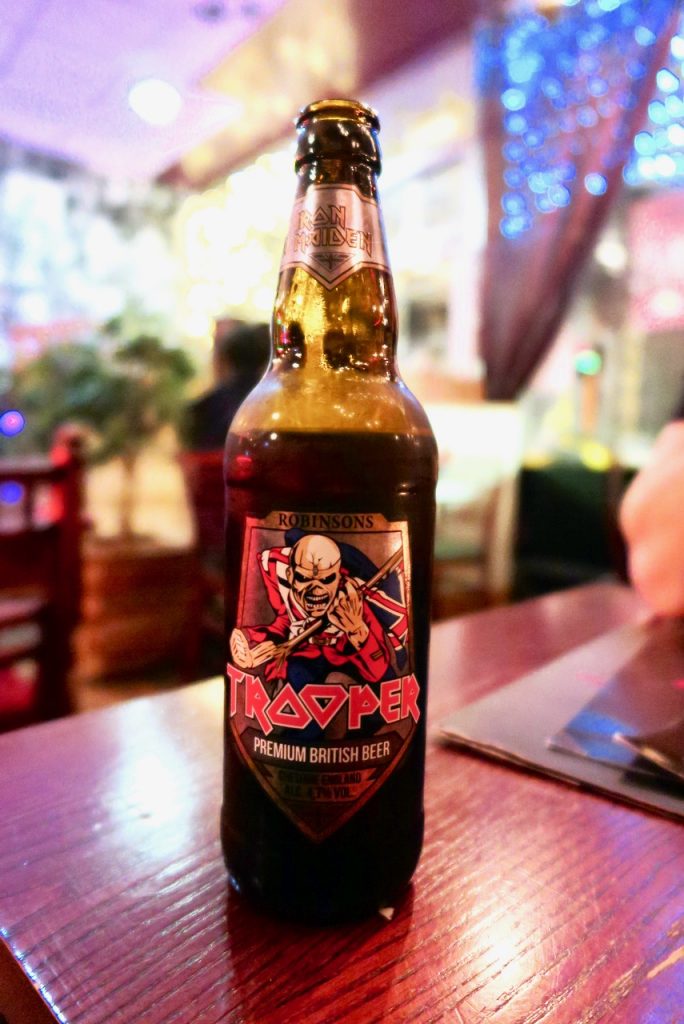 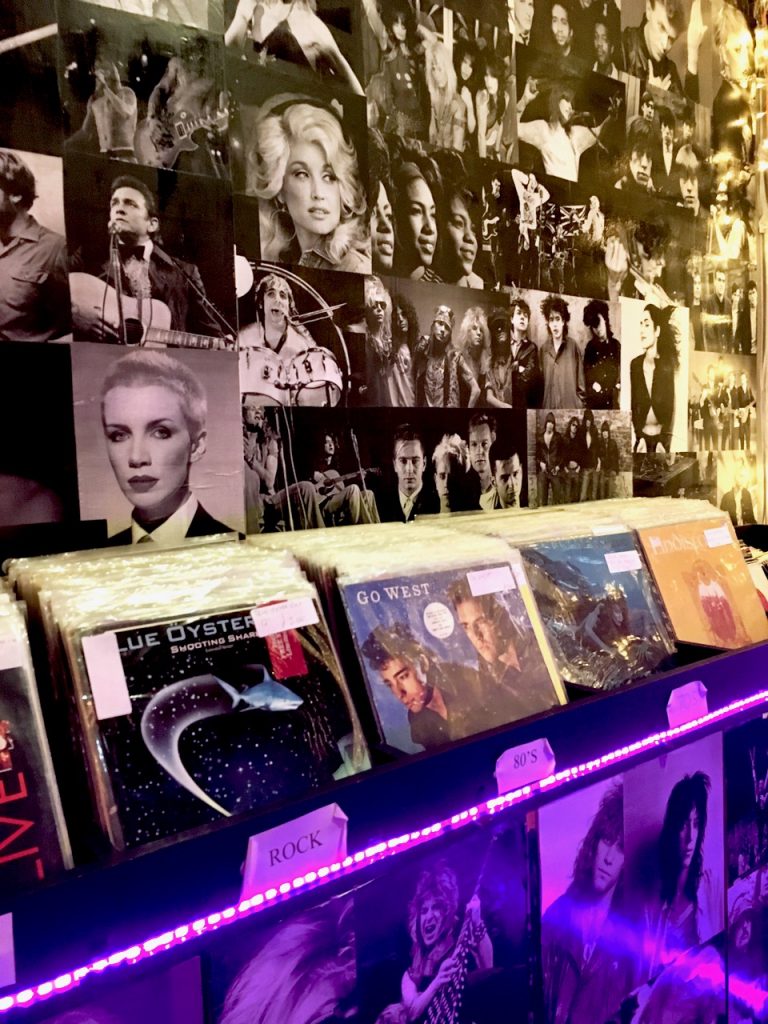 Exhausted, but wanting to make the most of our one night stay we strolled through the streets of Newcastle reminiscing about drunken times and ridiculous friends before stopping for a night cap at hip brewpub The Bridge Tavern. 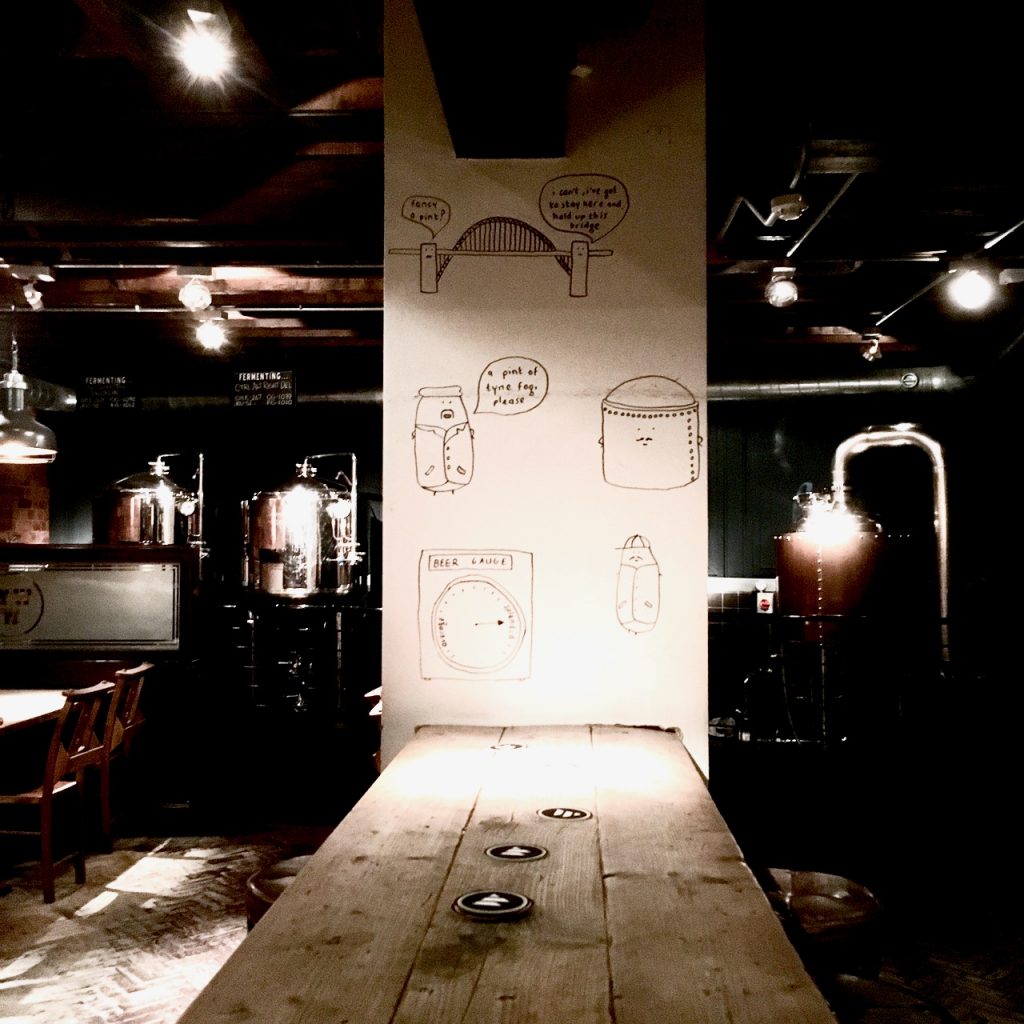 The bar had a classy gentlemen’s club feel, with lots of wood, dark leather, and book papered walls; but what struck me the most was the gleaming bronze micro brewery located on the ground floor. The heaviness of the pint mixed with long day took its toll and we gave in, calling it a night. The stroll home was only 10 minutes but gave us one last chance to watch the city lights bounce off the Tyne before we bedded down for the night. 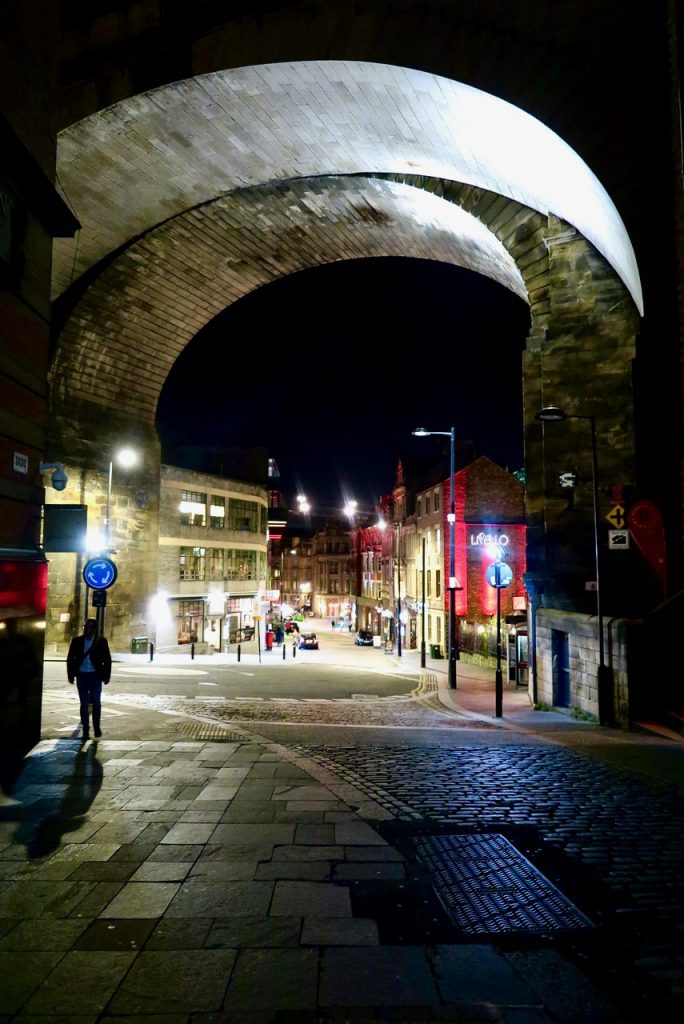 Well rested after a quiet and comfortable night we headed down to take advantage of the buffet breakfast. Travelodge now do a pretty mean vegan fry up with mushrooms, tomatoes, Linda McCartney sausages, and Heinz baked beans. I got a little over excited and filled my plate high so was in much need of a walk to burn off some of the calories! 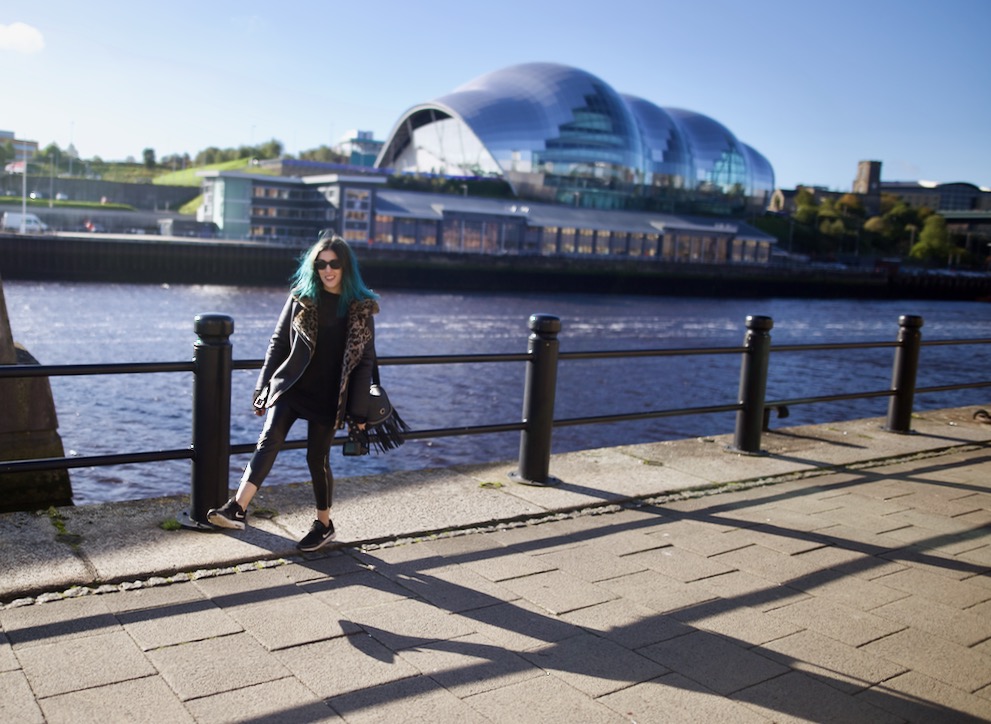 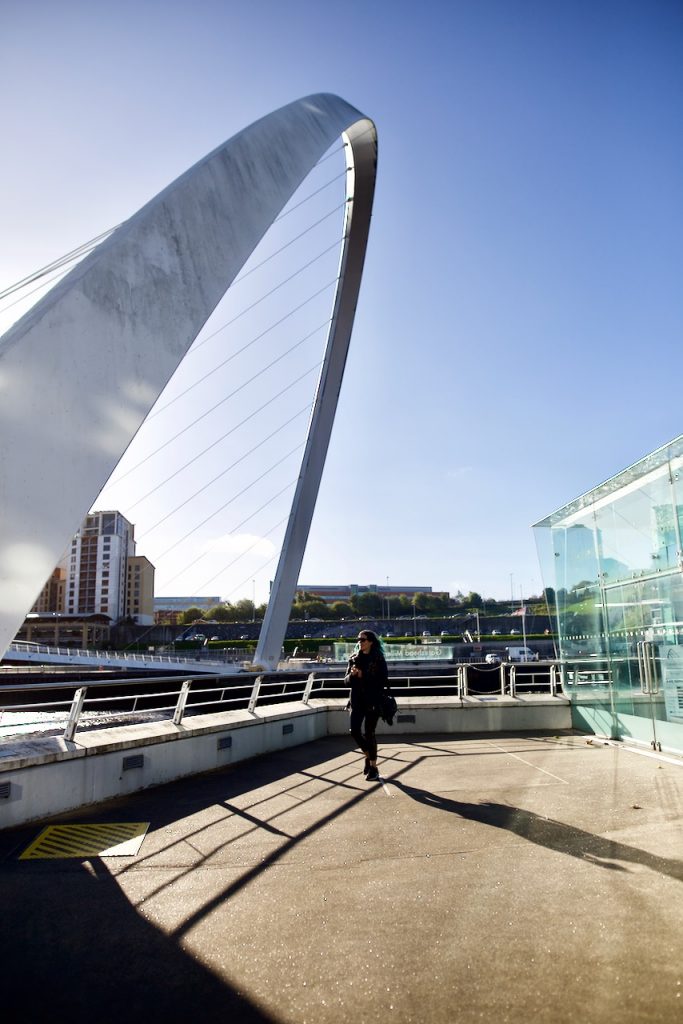 Throwing distance from the hotel was the Millennium Bridge, so we took in the morning air and got some blog shots before reaching The Baltic. 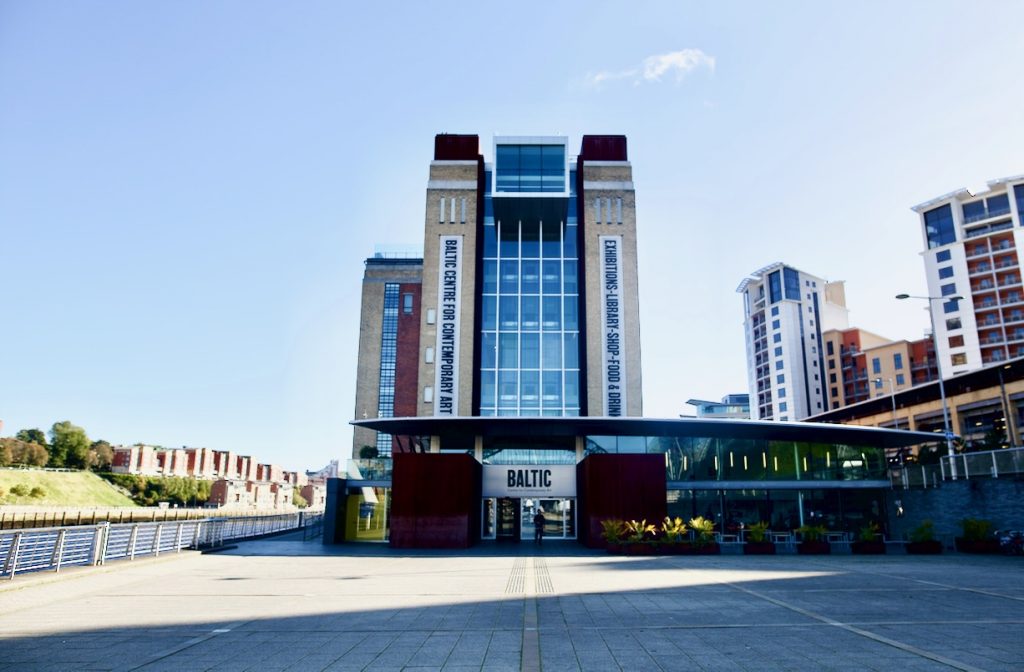 We were far too keen and got to the gallery a little early but passed the time perusing the shop where I (of course) made a few purchases. Much of the gallery was closed as they prepared for new installations but there were still a few interesting pieces within The Bloomsbury Exhibit and the observation deck on the 5th floor was still open to get some cracking views of the city.

Surveying the city from up high we planned the rest of the day. 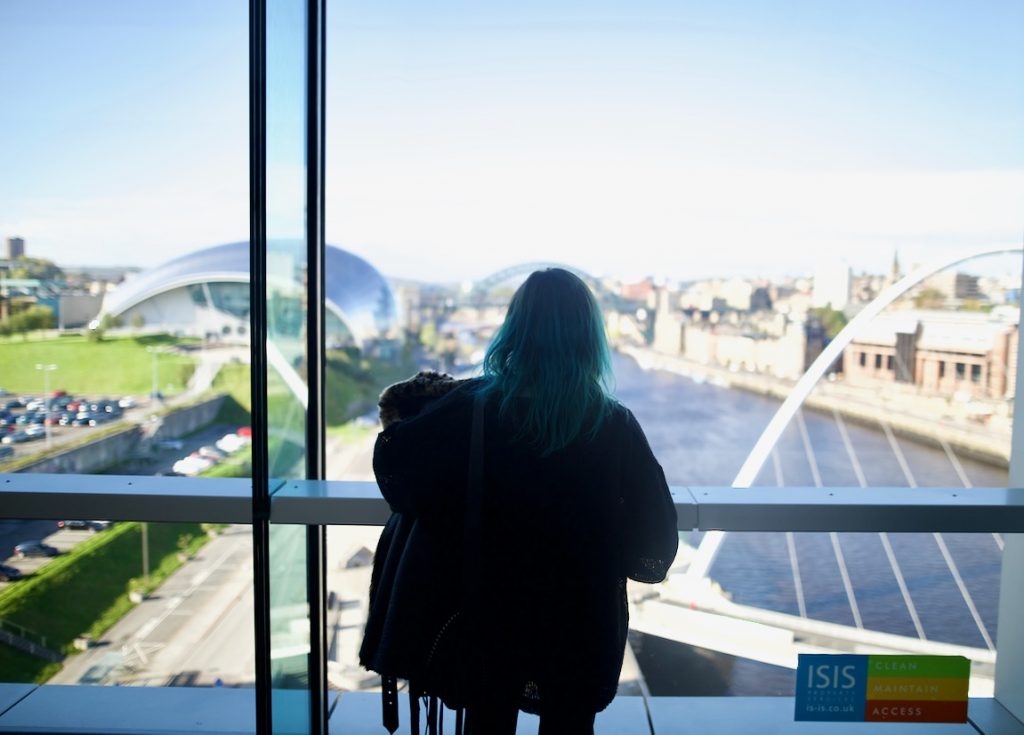 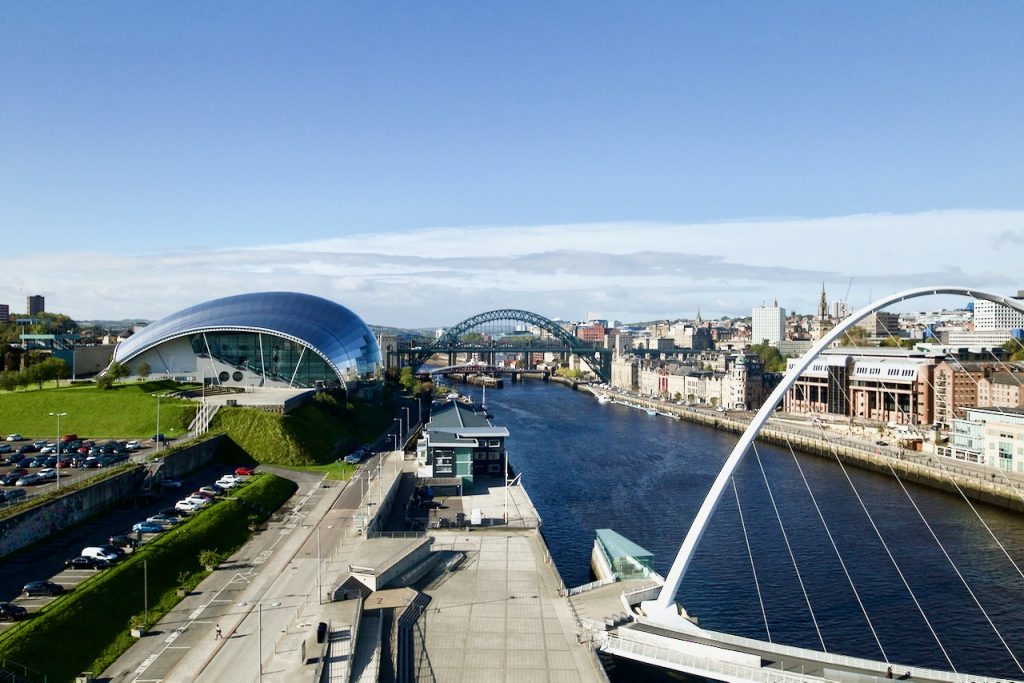 Having a generously late 2pm checkout we worked out we could squeeze in a few of the suggestions from Erica’s blog and some street art hunting. 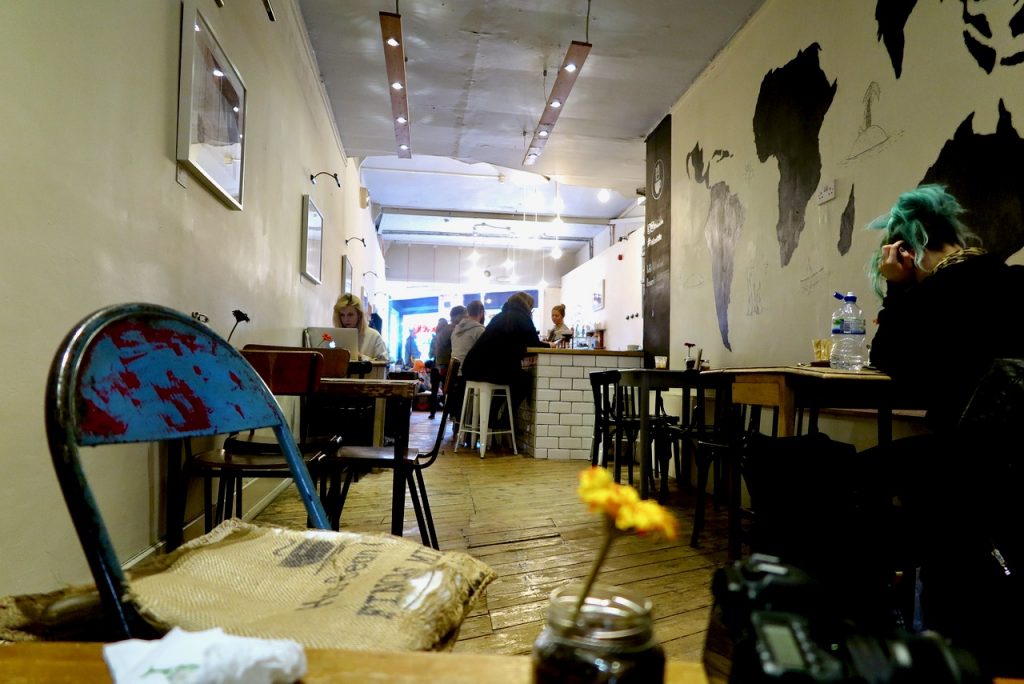 First stop was Pink Lane Coffee just a few door down from where we had dinner the night before, and just as cool. The walls were covered in awesome artwork and they served up a mean almond latte. I sat back on a tattered couch and watched the world go by, as Pablo caught up with more work. 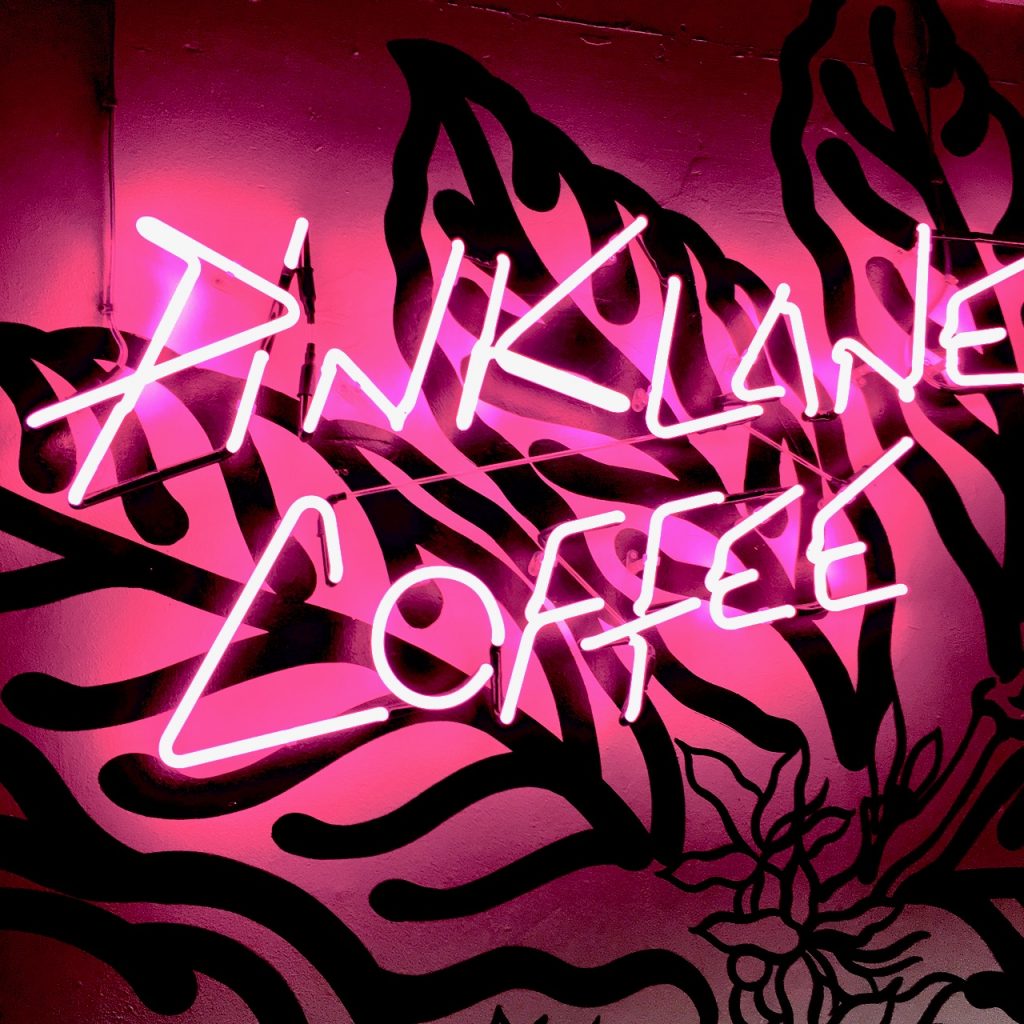 Convincing Pablo to log off and enjoy the rest of the day we hopped in the car in search of art. 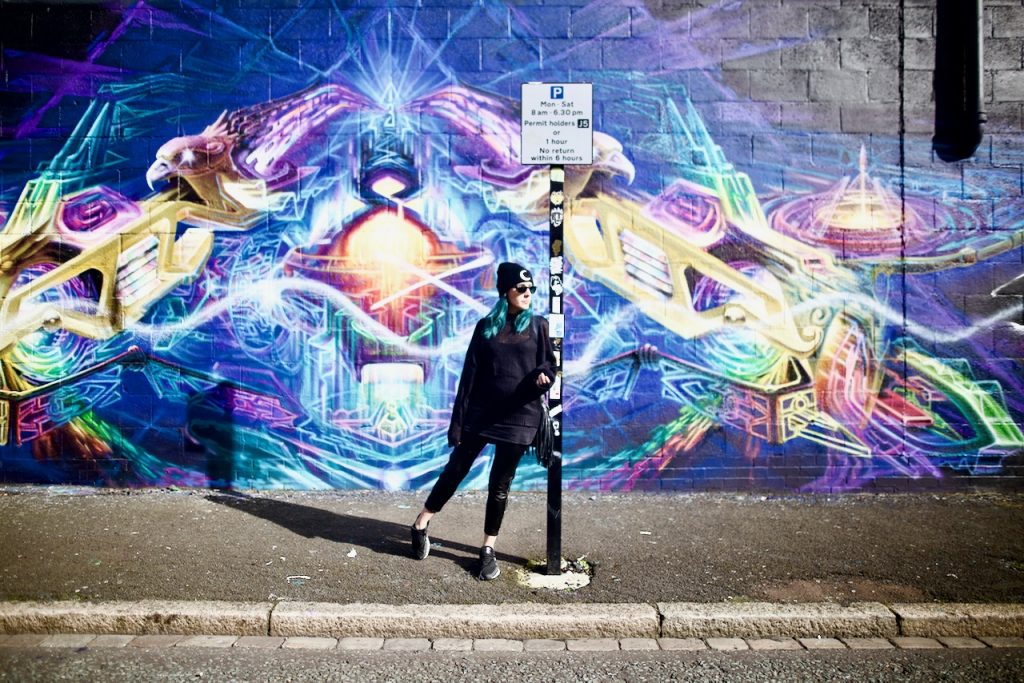 Whizzing past Pablo’s old student haunts in Jesmond and accidentally taking a detour through stunning Exhibition Park, the drive took longer than expected but was a fun little jaunt. Though I have visited Newcastle before I had no idea there was such a beautiful green space so close to the city centre. As we reached the stage of being forced to give up on finding street art due to our tight schedule we stumbled upon Tyne Bank Brewery, an art gallery, tattoo shop, pizza place and bar which is covered in awesome graffiti and murals. 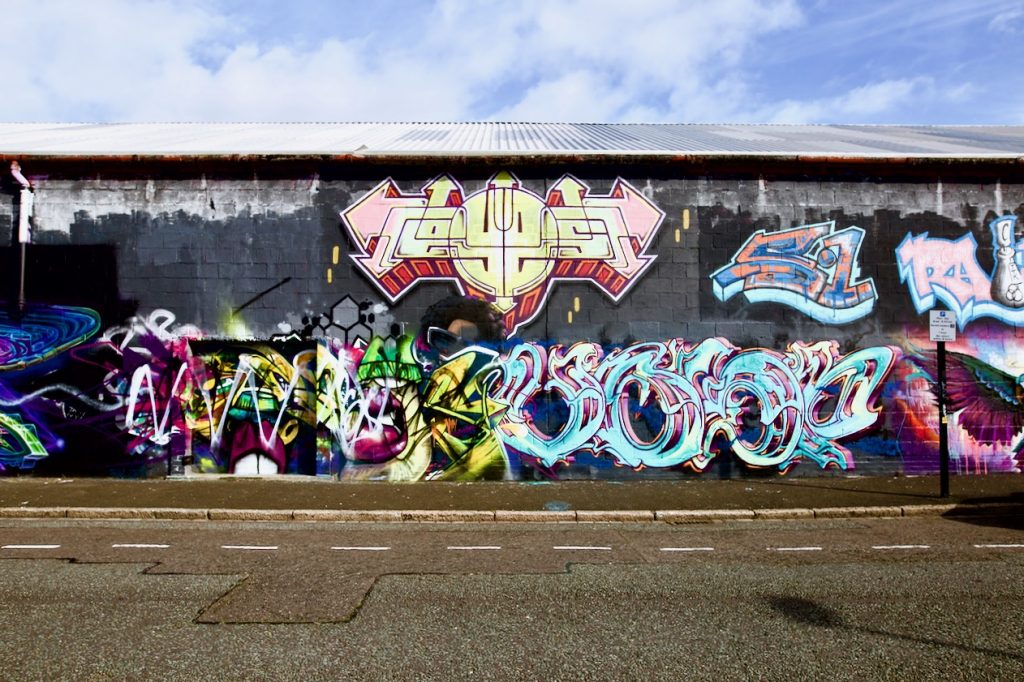 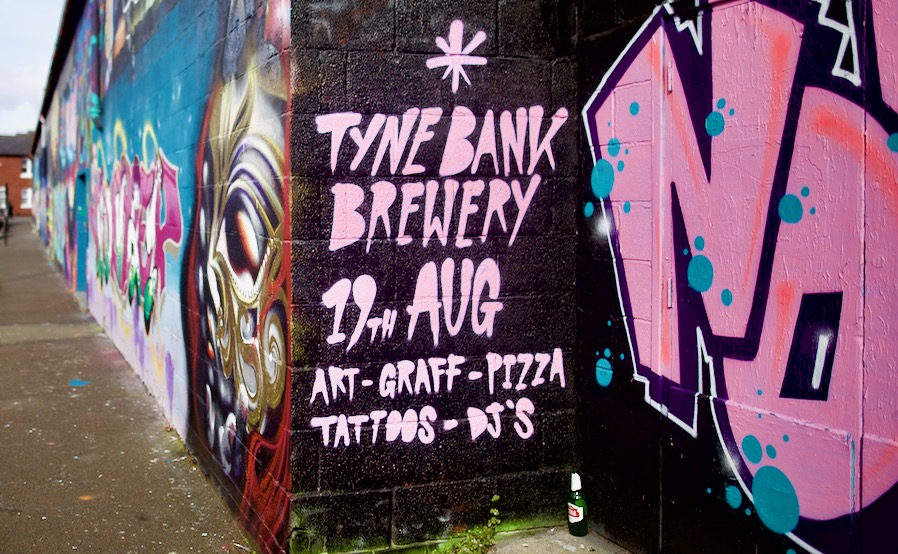 Now, having finally worked off breakfast we headed to our last stop of the day: The Ernest which was another one of Erica’s recommendations. From the second we pulled up and I saw the huge Darth Vader painted on the side I was already sold. The Ernest is a laid-back joint with quirky interior (which includes a mild Star Wars theme) and advertised love for both film and music. 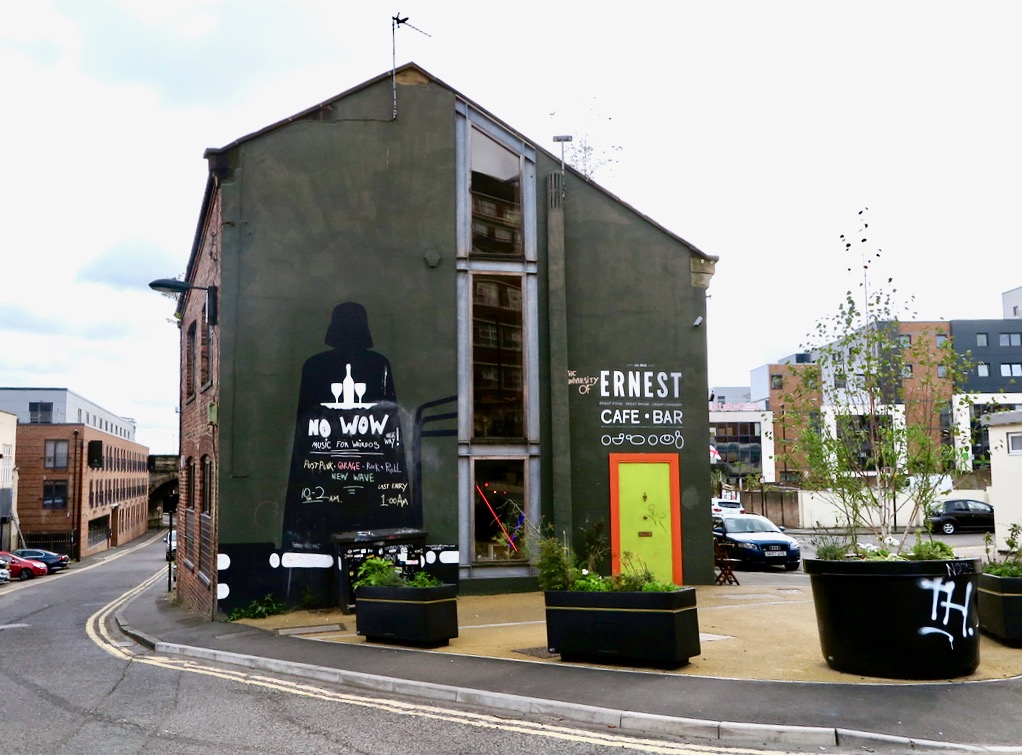 The food was homely, yet creative and had some great vegan options. As per usual we ordered to share so we could try as much a possible. We went for healthy soup, a salad and a side of sweet potato fries – ‘cause you can’t have a salad without chips if you want a balanced diet right? 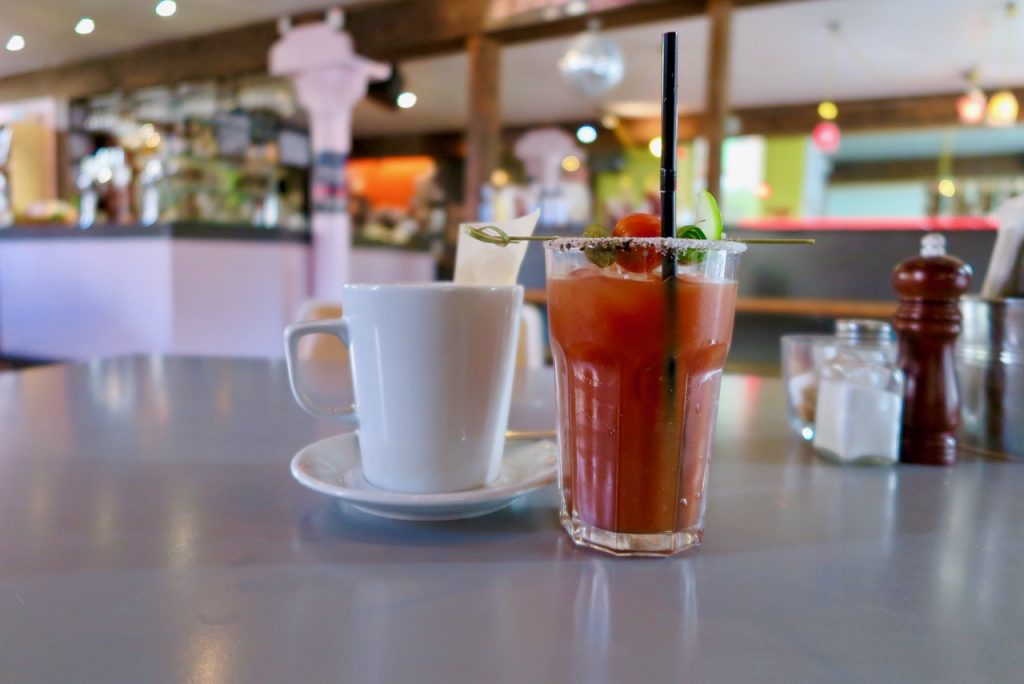 The soup and salad were both fresh and delicious but those sweet potato fries were next level and were some of the best I have ever had the pleasure of stuffing in my mouth. Since we had a long drive ahead we both stuck to soft drinks, I had a super refreshing local Ginger tea whereas Pablo was feeling well fancy and treated himself to the virgin bloody Mary. The staff at the Ernest were also great; with their friendly Geordie banter I could have happily hung out at the Ernest all day but, unfortunately, it was time to hit the road again. 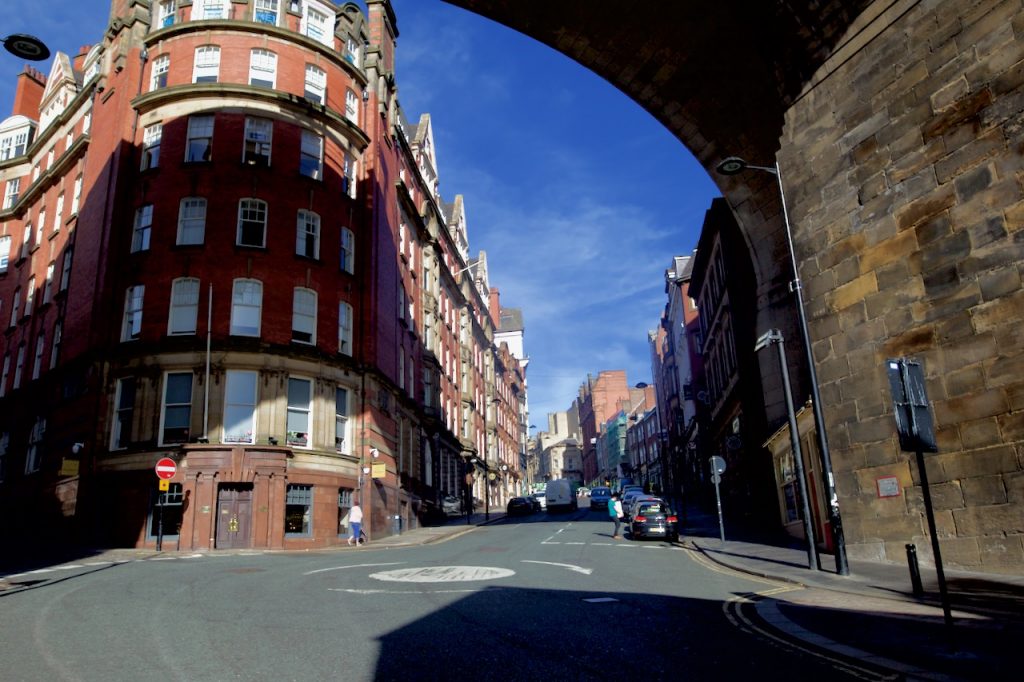 Though it was a fleeting visit to Newcastle the city had as much character as I had remembered and, much like Glasgow, has a perfect balance of working-class charm and independent spirit, we definitely need to make our next trip longer.

*This post was in collaboration with Travelodge, but all opinions and words, as always, are my own