Having ticked off most of Lisbon’s tourist spot on my first trip to the city, this visit was all about checking out the alternative side of Lisbon. Here were some of my favourite spots; 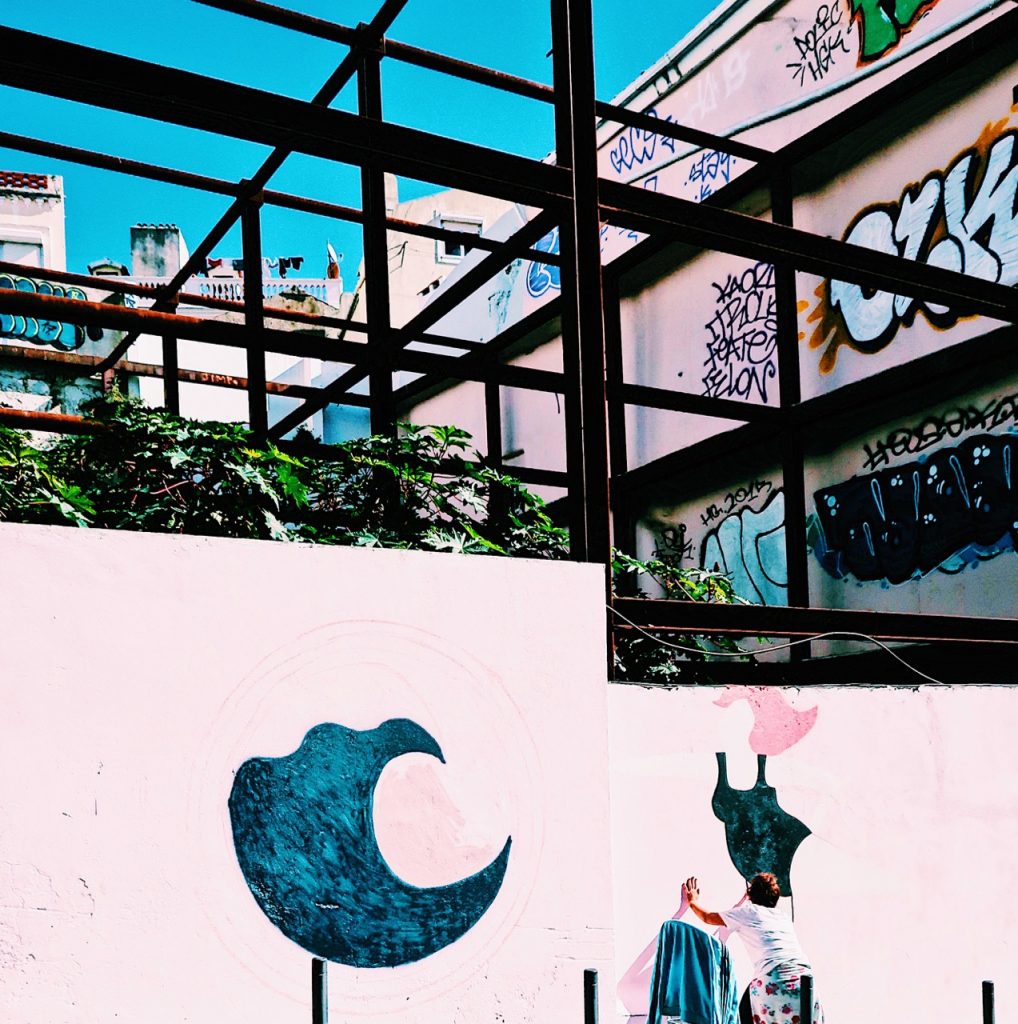 As this was a short work trip, I didn’t have as much time to go street art hunting as I would have liked – but Lisbon is a city filled with creativity and it is easy to spot some great pieces without even trying. 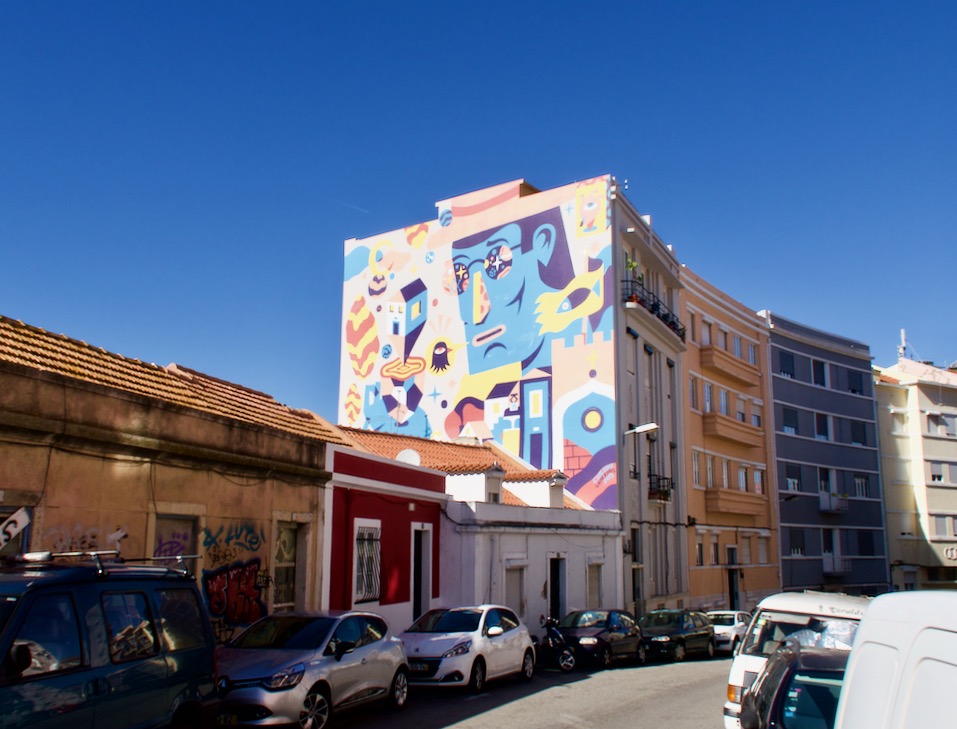 Key areas include Barrio Alto and LX Factory, but if you want more check out The Occasional Travellers’ great guide, or you can follow the Lisbon street art app. 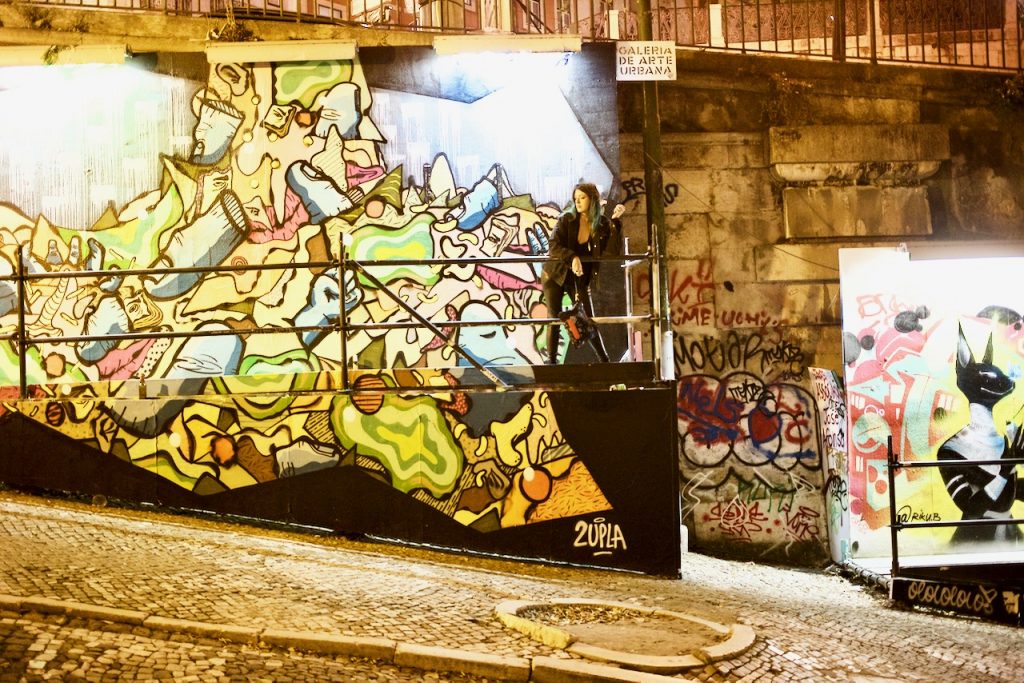 If self guided tours is not your thing you can also take a street art walking tour. After having great experiences in both Berlin and Budapest this was high on my list but unfortunately only ran on Tuesday and Thursdays, so I had to miss out this time. 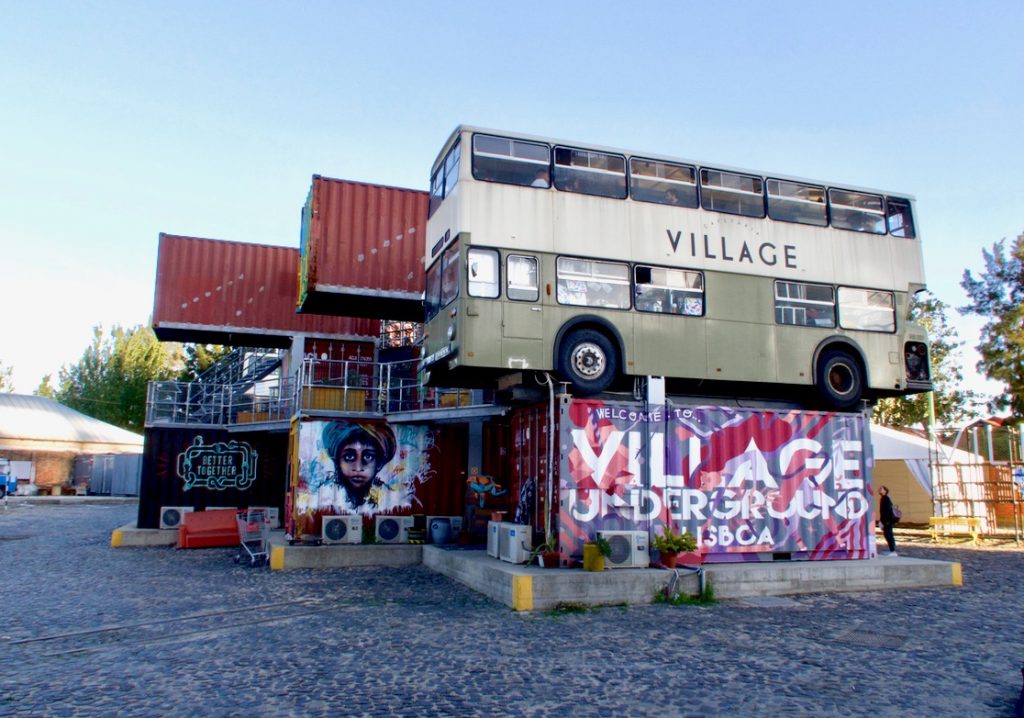 Wandering through a bunch of warehouses I felt like I had taken a wrong turn, but just as I thought we had reached the end of the road, colourful shipping containers appeared, stacked on one another like lego. 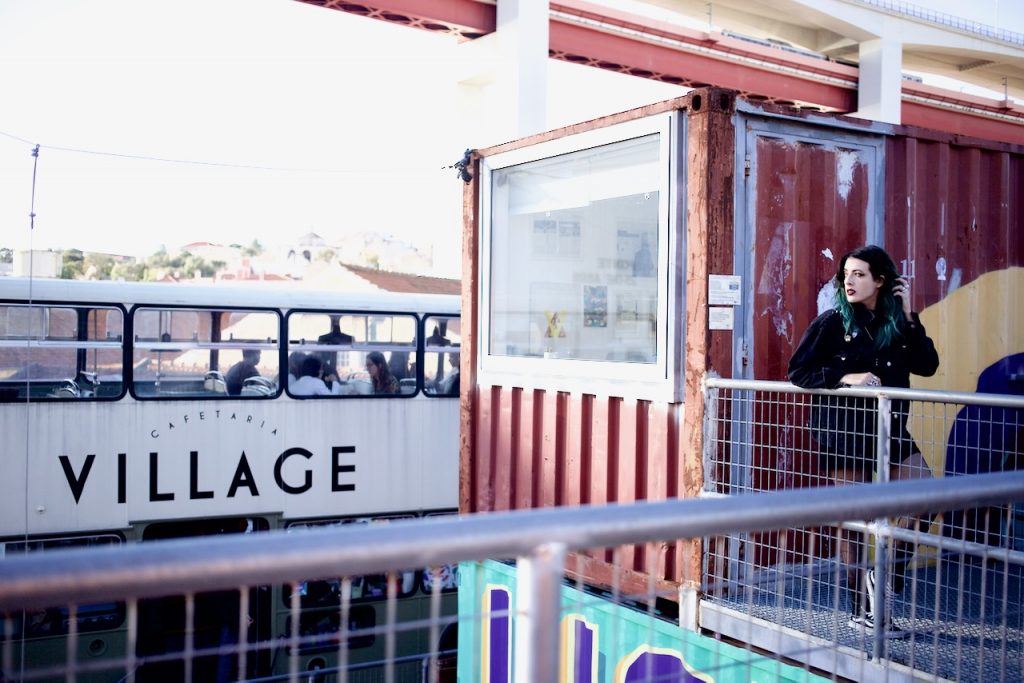 Balanced on top of these brightly coloured bricks was a double decker bus. The colour, creativity, half pipe, and swing made the place look like a modern child’s playground, but it is actually a creative incubator space and cool café. 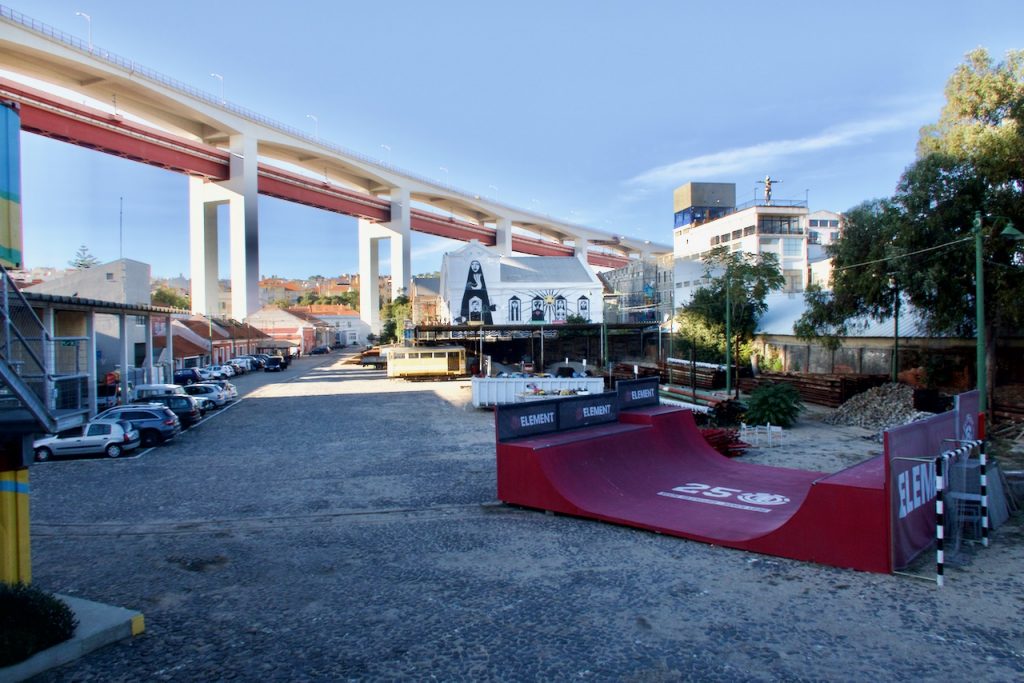 Pablo and I enjoyed the atmosphere and setting of Village Underground so much we visited twice, firstly to clamber round the structure and photograph the outfit images for my weekly update. 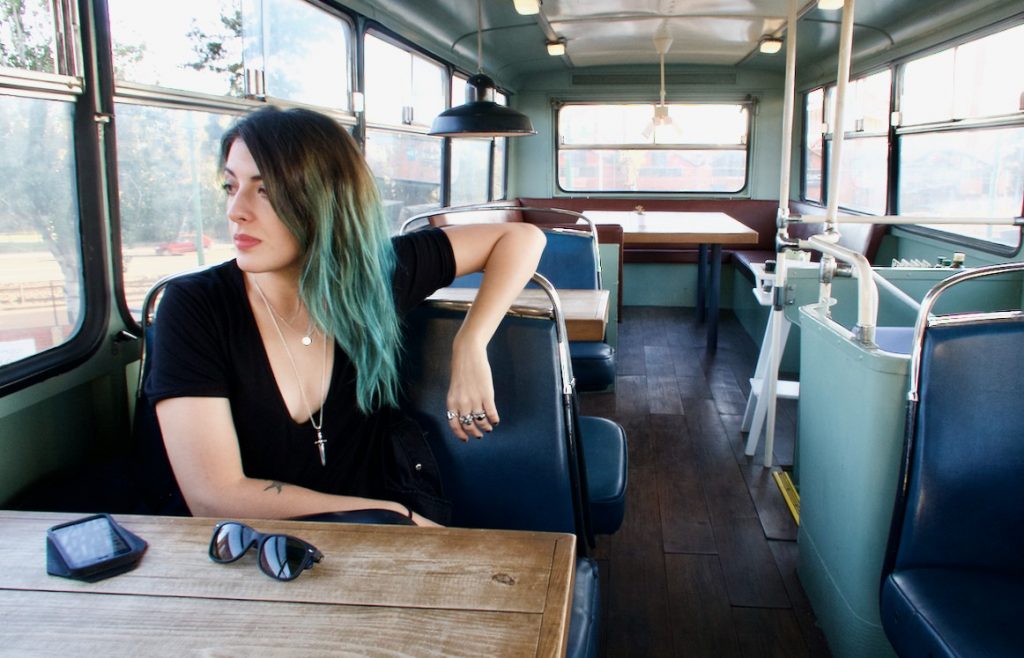 Work out of the way, we returned the next day to show Gary our awesome discovery and grab a relaxed beer on the top floor of the bus/café. 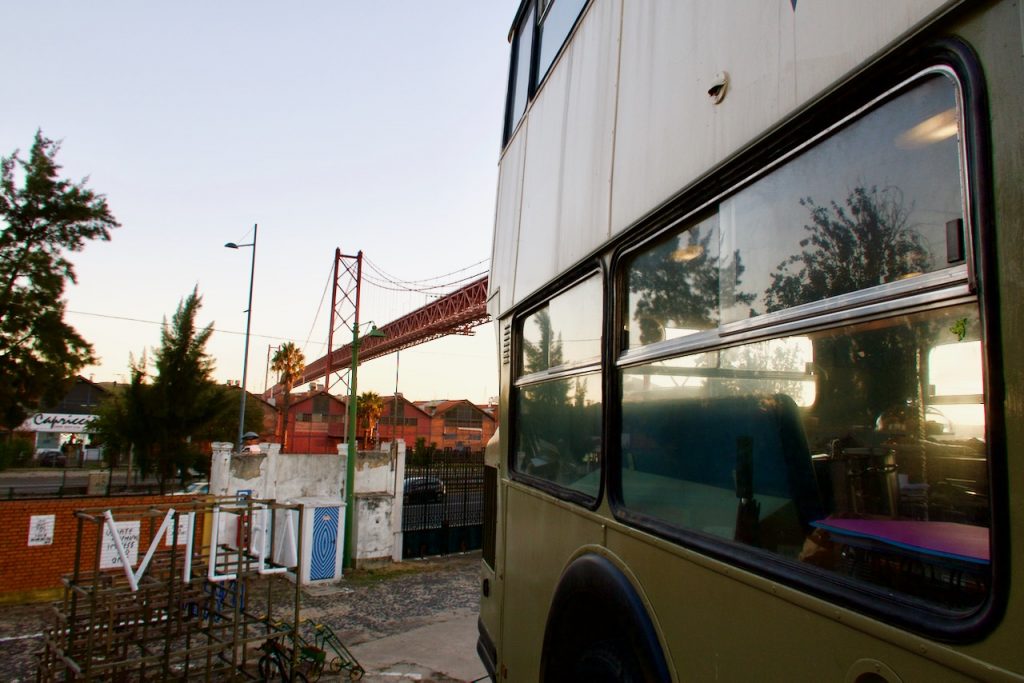 Sitting below the famous 25 de Abril bridge whilst watching planes fly in an out of the city, this is an unexpectedly perfect place to chill out and soak up the city’s creative vibe. 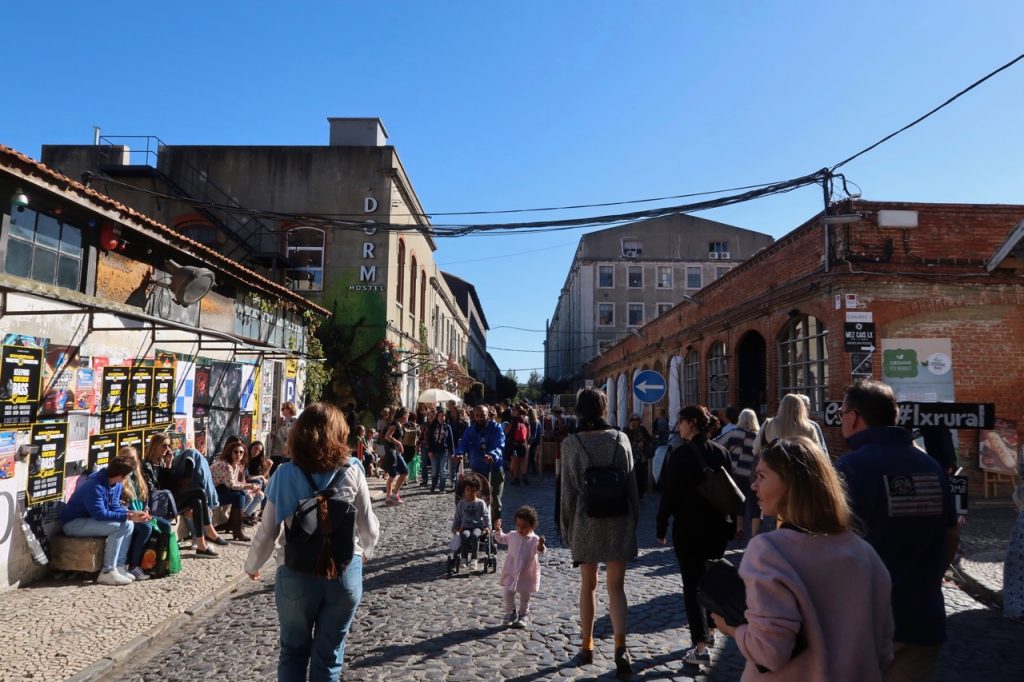 Just across the wall from Village Underground is LX Factory, an area which once housed many of the city’s fabric factories.

After a downturn in this industry the buildings became disused, and in 2008 the industrial area transformed into independent cafés, bars, art spaces, shops, music venues, and more. 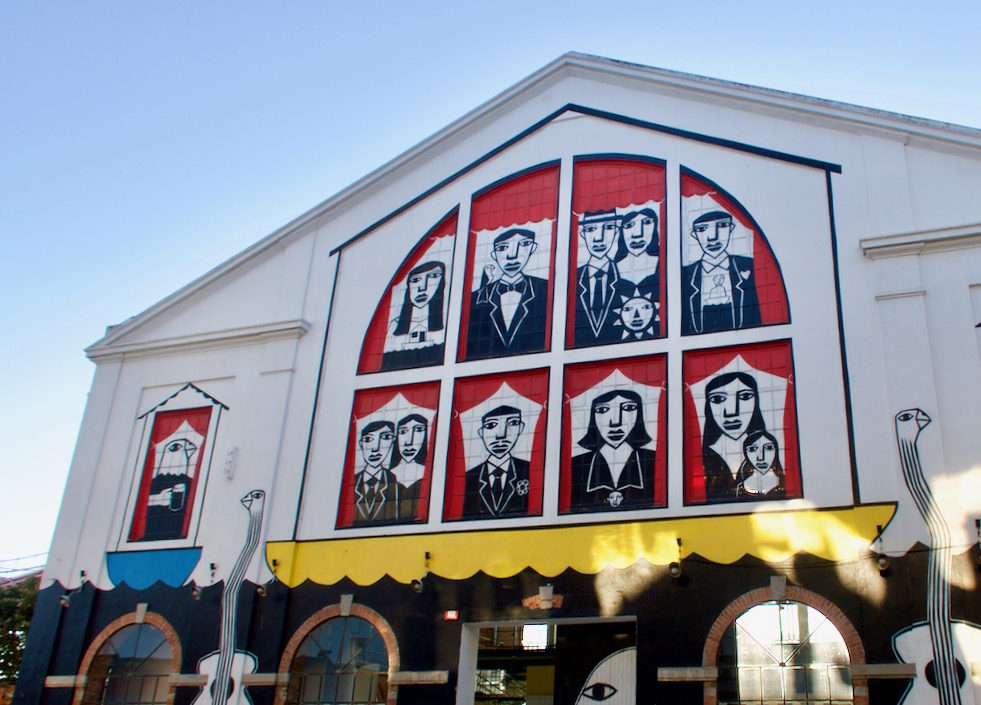 The factories have been left relatively untouched apart from the vibrant artwork which covers their exterior. 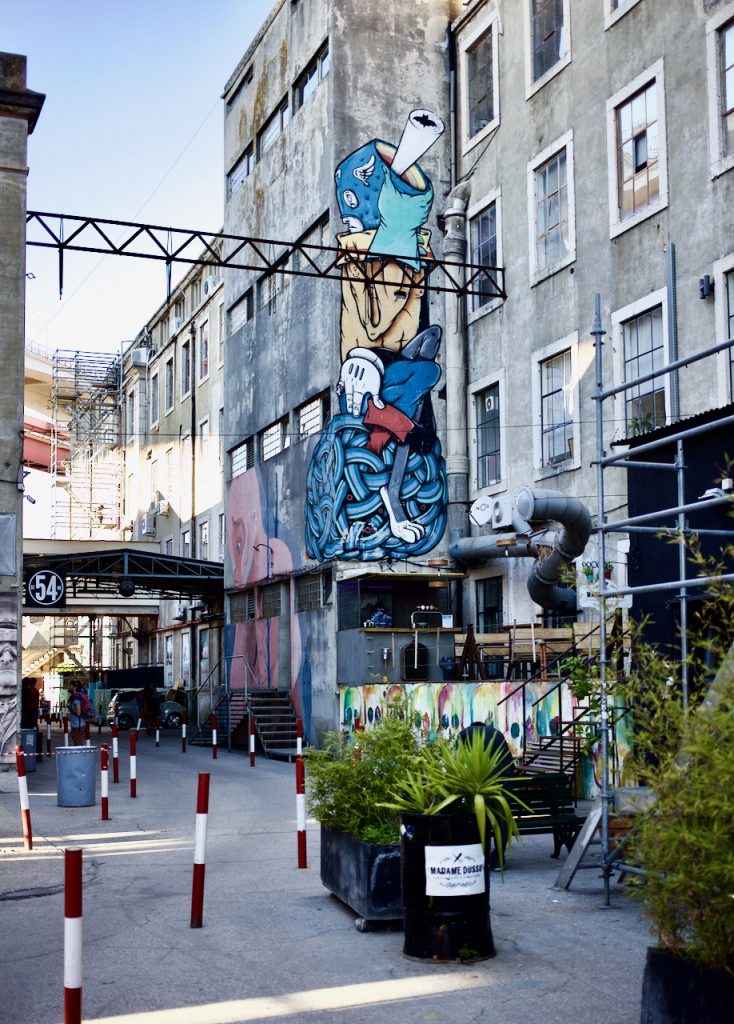 This is another place that we visited twice, firstly on a Saturday when it was jumping with locals and tourists browsing the shops, weekend market stalls, and the popup organic market that was housed in one of the larger event spaces. 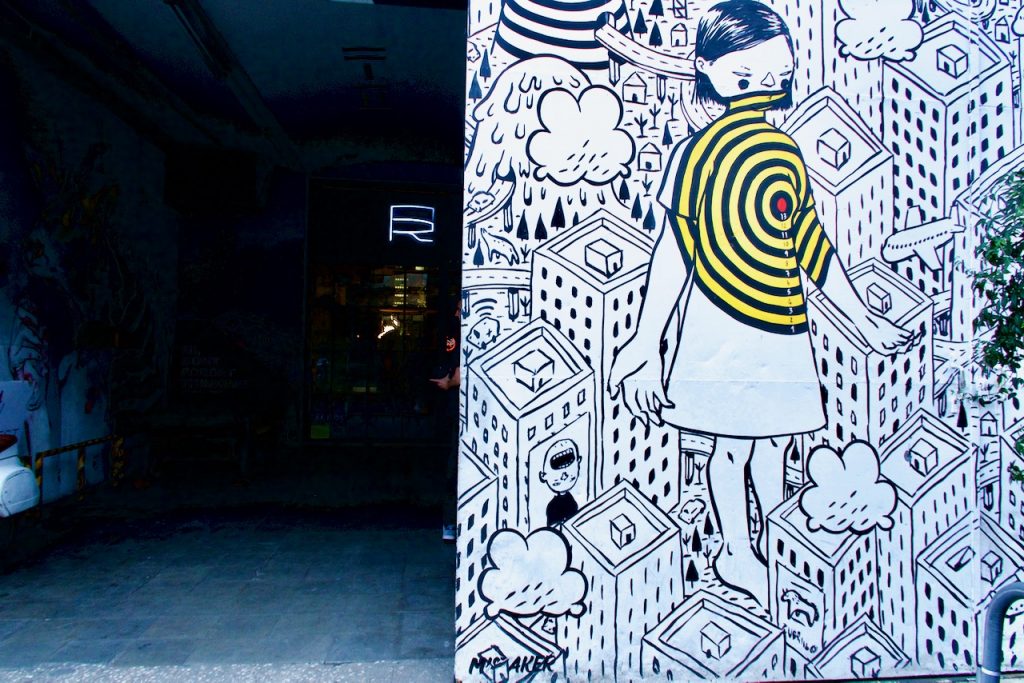 Though it was a fun atmosphere, I prefer a little more low key environment, especially visiting somewhere for the first time. So we returned on Monday afternoon when it was much calmer which let us take in the art and unusual shops, without tripping over people. 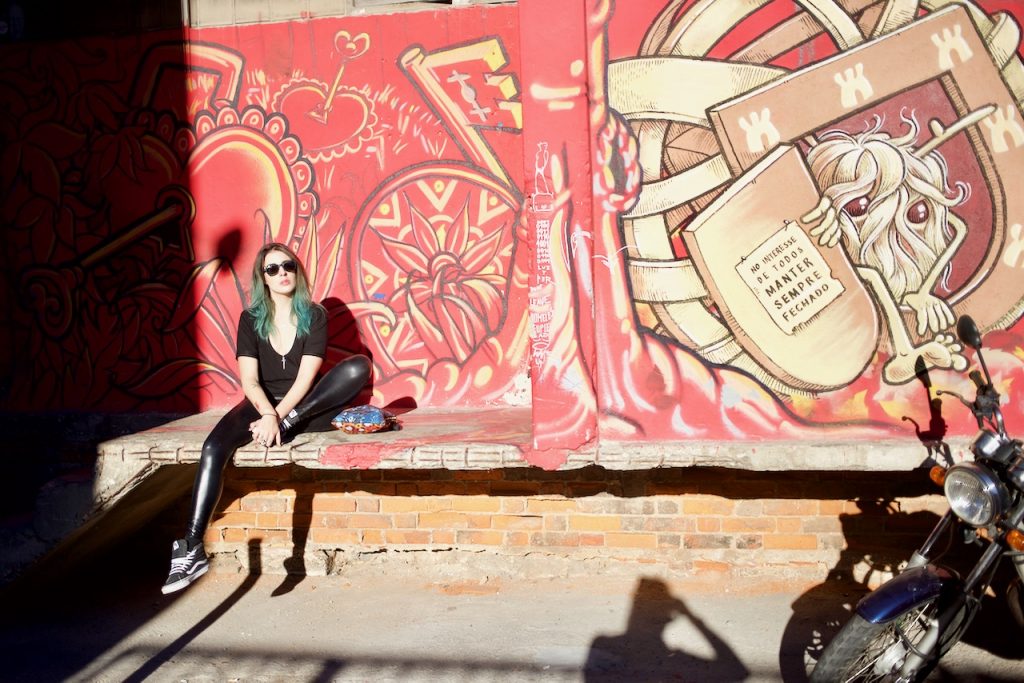 Named by Culture Trip as Lisbon’s ‘Trendiest Quarter‘ this is a fantastic area to spend time experiencing modern Lisbon. 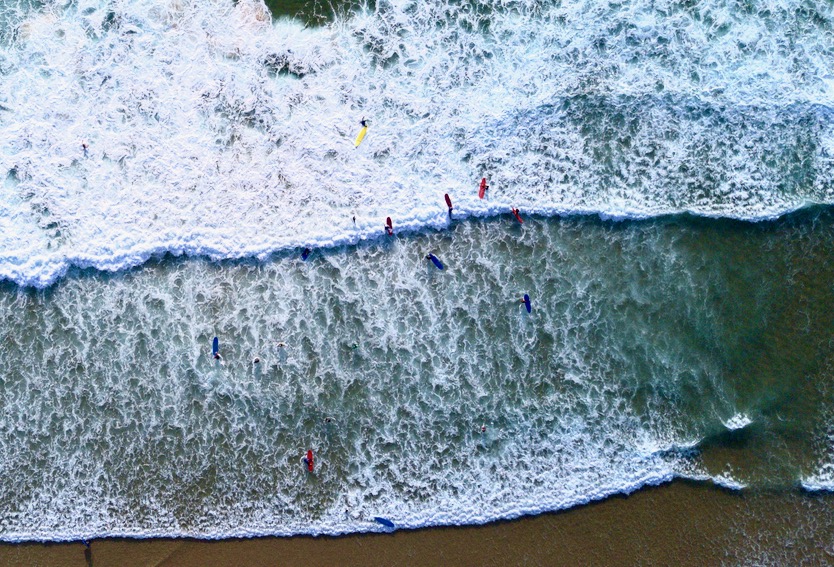 I didn’t actually head on down to the beach, but with many amazing surfing spots as little as 40 minutes outside the city centre it is high on my list for my next visit.

Pablo went surfing on his last trip to Lisbon, and raved about his experience. If it’s your first time, you’re a pro, or just love a side of beach with your city break, then Lisbon has plenty of options. Surf Holidays.com has a list of some of the beaches where you can catch a wave.

Take Lisbon From Up High 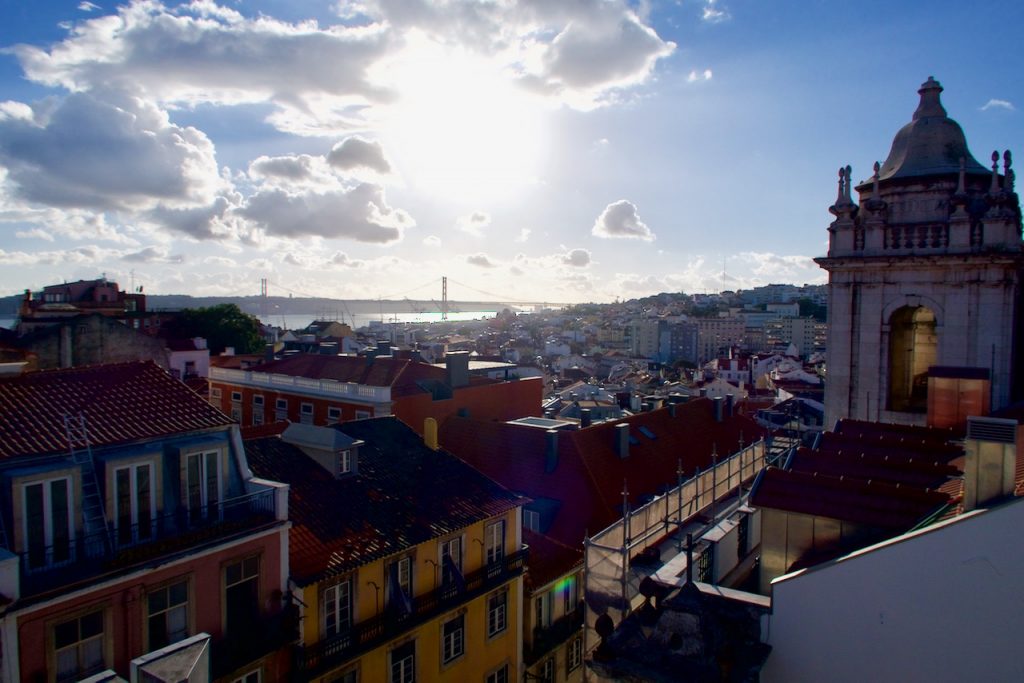 With a sloping landscape surrounded by water, Lisbon is truly stunning from above. We were lucky to have an AirBnb with it’s own roof terrace, but even with this we couldn’t get enough of seeing these terracotta roofs and winding streets from up high. 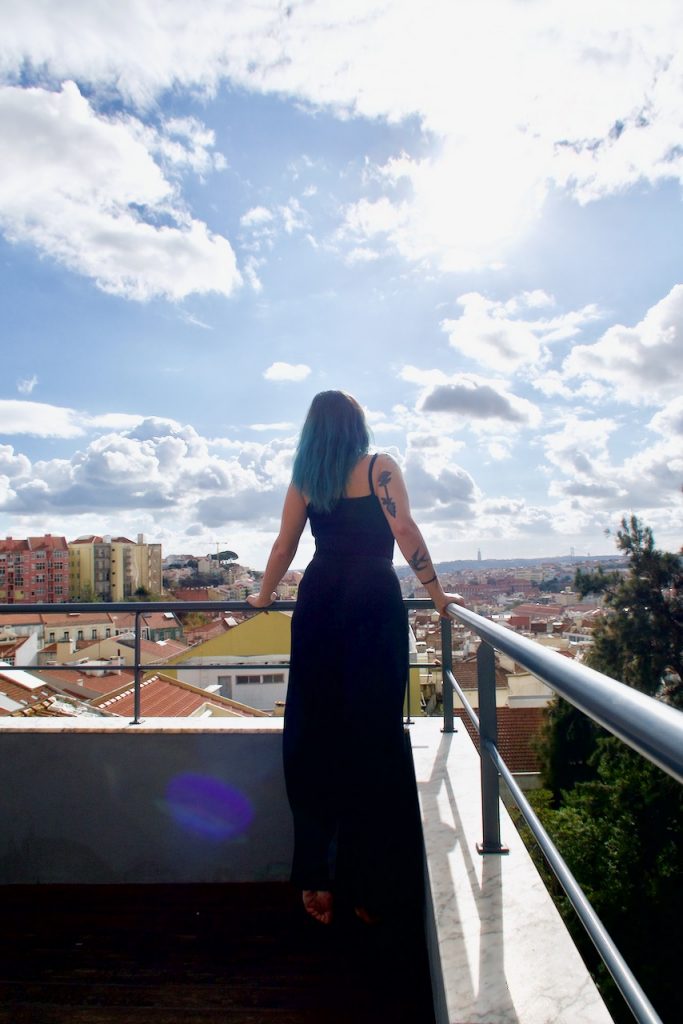 After a good wander round the city centre we headed past Bario Alto to Park Bar. Heading 5 floors up in a graffiti covered lift to the roof of a car park, we came across the hip bar pumping out music and filled with people enjoying their weekend. We made the error of arriving just before sunset on a Saturday night, but even then we managed to squeeze up next to some other friendly punters and grab a seat as the sun set over the city. 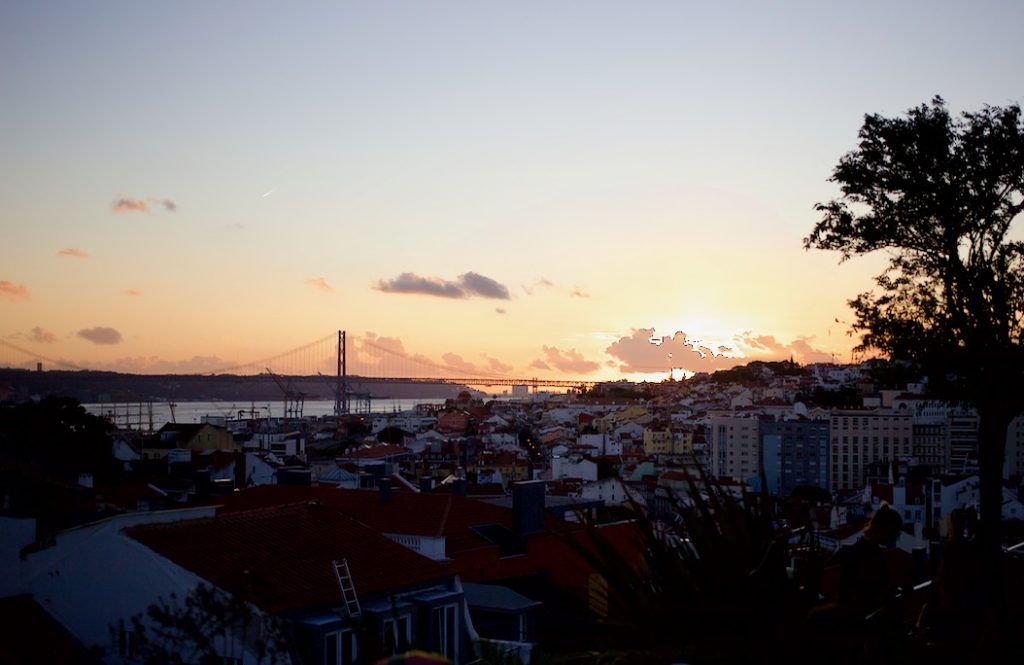 Due to its central location, Park Bar is a popular spot and is not open everyday but there are plenty of other rooftop waterholes in Lisbon including: Sky Bar, Silk, Terrace BA, Penthouse, the Memmo Alfama Terrace, and Topo. 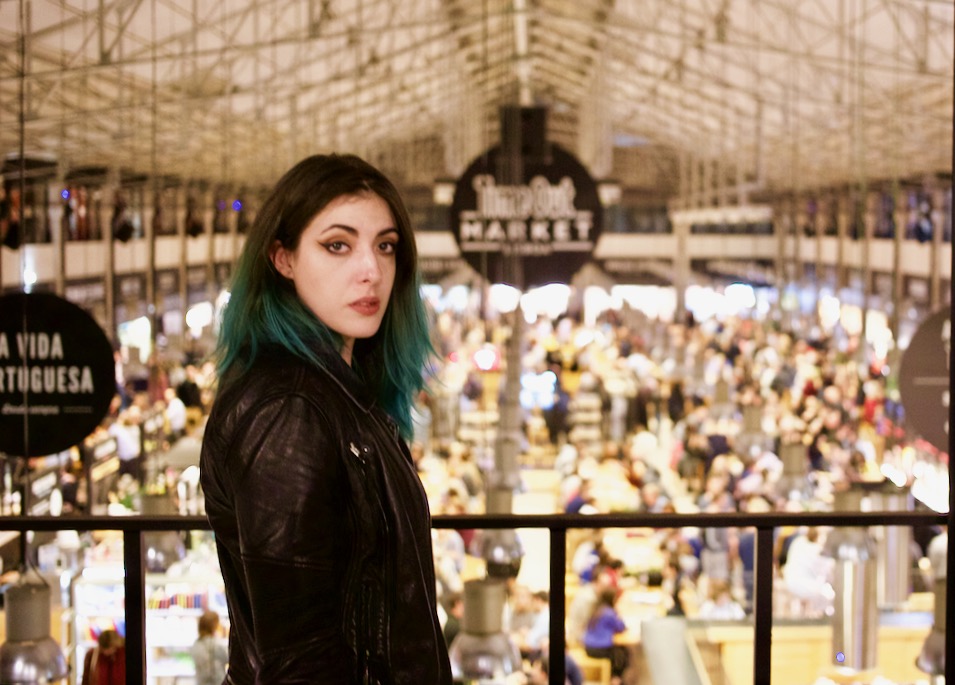 I’ll admit this option isn’t exactly alternative (being the number one tourist attraction in town), however, it is a worthwhile place to swing by. This huge food hall has an incredible array of eateries which have been curated by TimeOuts’ pool of local knowledge, journalists, and food critics. 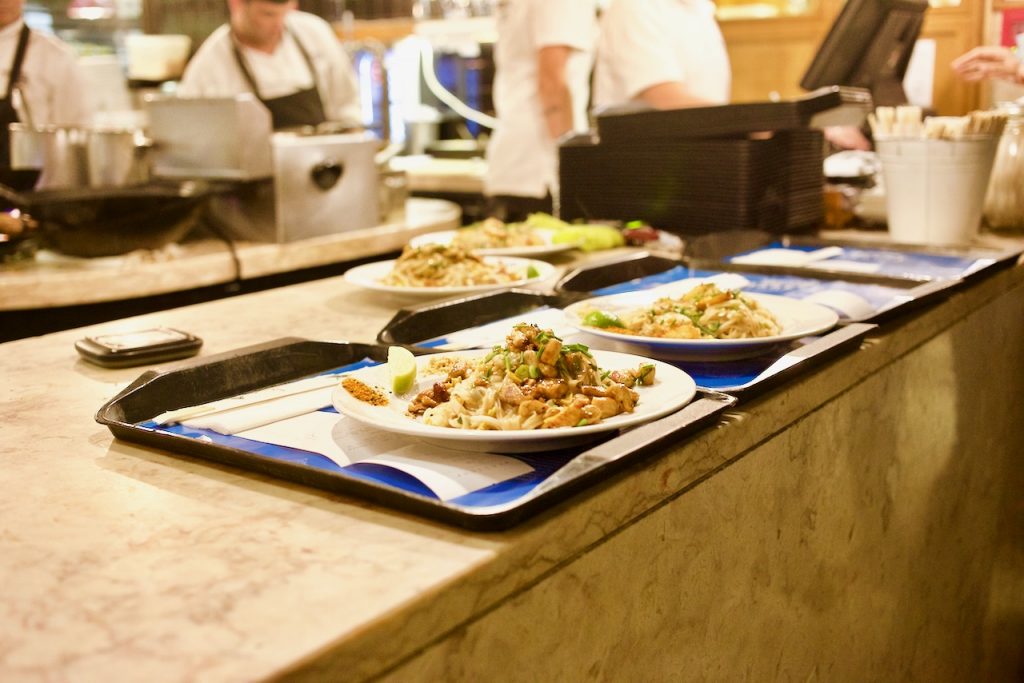 This place is great if you are travelling with people with different tastes, you love trying new food, or even if you are solo and don’t want to seem alone. The TimeOut branding is a bit overdone in my opinion, but it is a lovely open setting with a fantastic atmosphere. 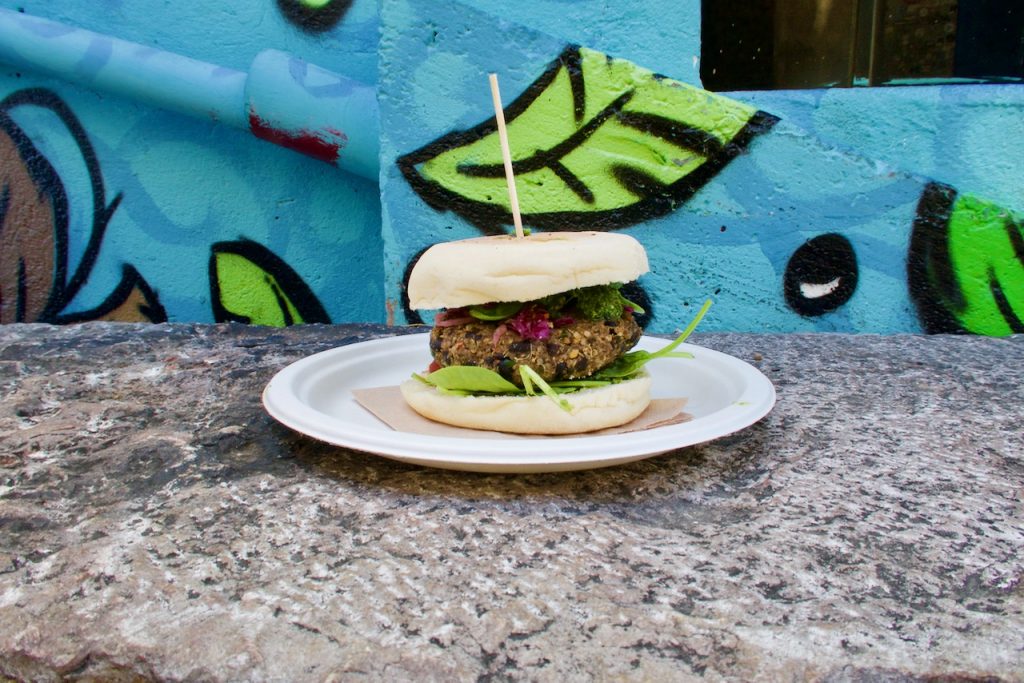 Lisbon is well known for its seafood, flaming chorizo, and custard tarts so at first glance it may not seem to be a very vegan friendly location. Of course, the city takes great pride in its traditional fair but it is also an extremely modern city with a young population that is embracing the increase in veganism. Some popular spots include: 26 Vegan Food Project, Aloha Cafe, and Miss Saigon – but there are plenty more to choose from. 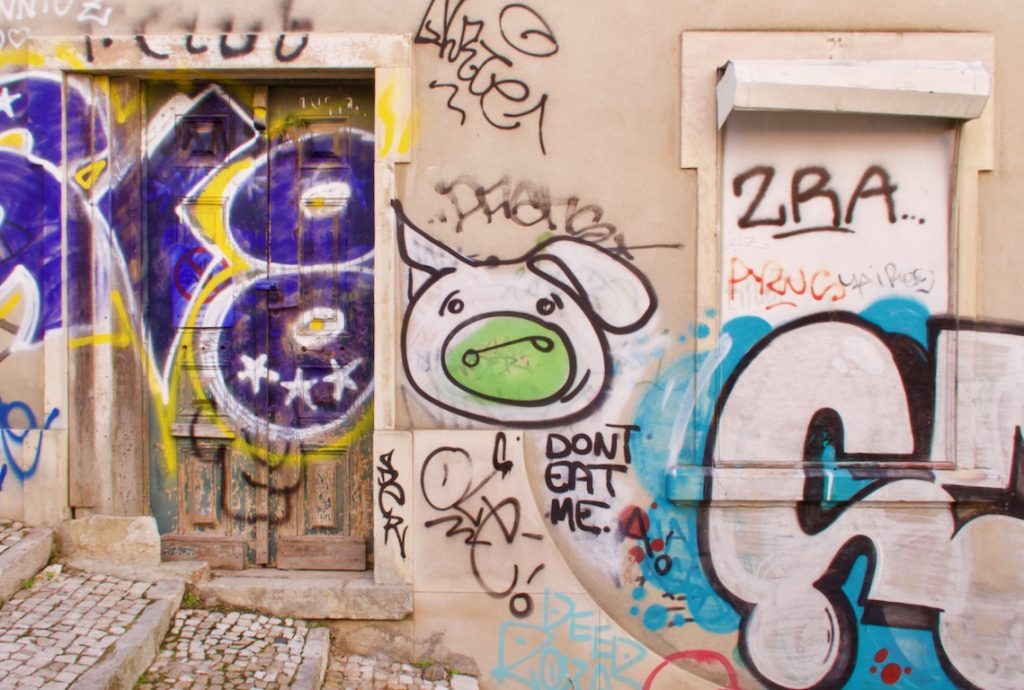 I was travelling with non-veggies, which wasn’t a problem with many restaurants offering vegan options on their regular menu. We had great vegan pizza In Bocca Al Lupo, taco’s at Mez Cais LX, and a mammoth toastie at Village Underground which catered for all of our foodie needs without hassle. 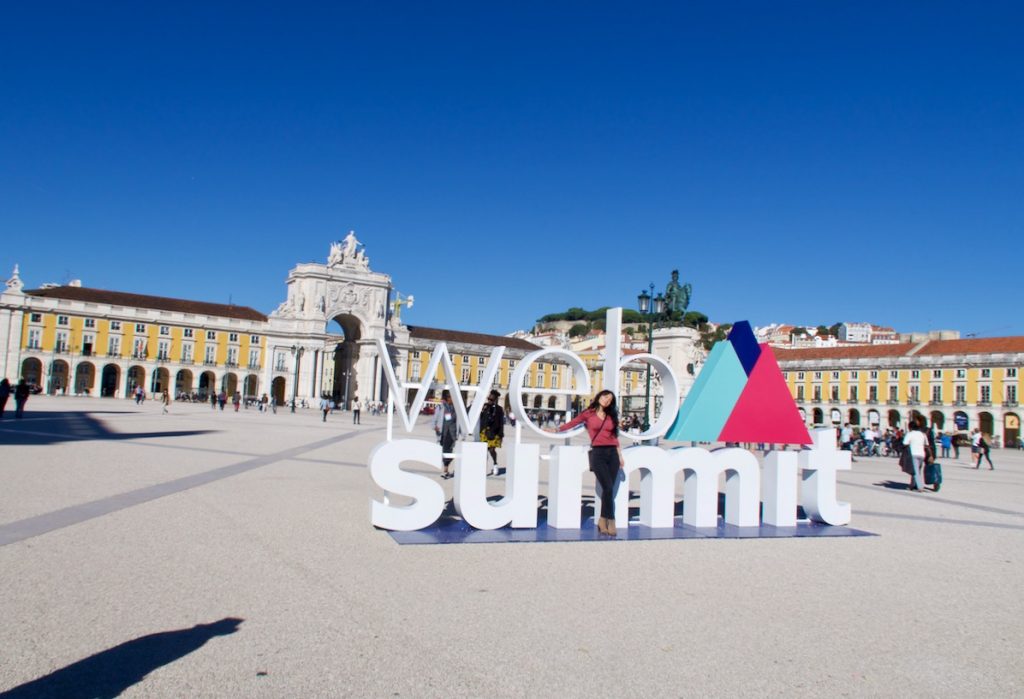 Once a year the population of Lisbon expands by 60,000 people who descend on the city for this massive tech conference. This is actually the reason Pablo and Gary were in town, and on hearing their tales of inspirational speakers and industry influencers I think I’ll be grabbing myself a ticket for next year instead of just hanging out for the weekend. 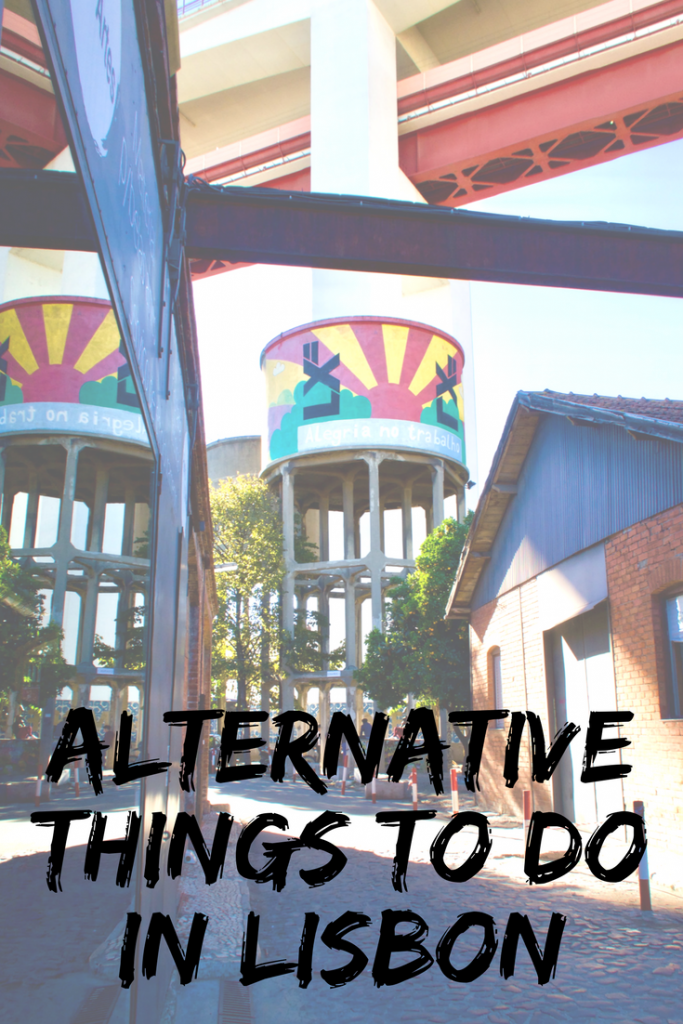