Pablo and I have travel many places together but Berlin was my first ever surprise trip. Every deatai Knowing that an open top bus wouldn’t quite cut it, Pablo had researched a more exciting way to see the city and had plans for us to join Alternative Berlin, a tour group focusing on Berlin now and the subcultures that make it such a unique and creative destination.

Having ticked off Checkpoint Charlie, The Memorial To The Murdered Jews of Europe and The Berlin Wall Memorial on our tourist sites lists we made our way across town to meet the 3pm tour at the Iconic Tower at Alexanderplatz.

Stepping off the train we were greeted with Berlin’s equivalent of Leicester Square; gaggles of tourists and souvenir shops are the last thing I want to see when visiting a new place, and I had major concerns that the tour’s alternative title was just a gimmick.

Our mainstream meeting point was quickly addressed by our tour guide, Ru, and after a quick introduction to the area and what to expect from the tour we were on our way.

Hopping off the train at U Weinmeisterstraße the large group was impressively still intact. Gathering at Hackescher Markt we stood outside a row of glossy bars and learned about the fall of the wall and how it affected the people’s movement and property rights. 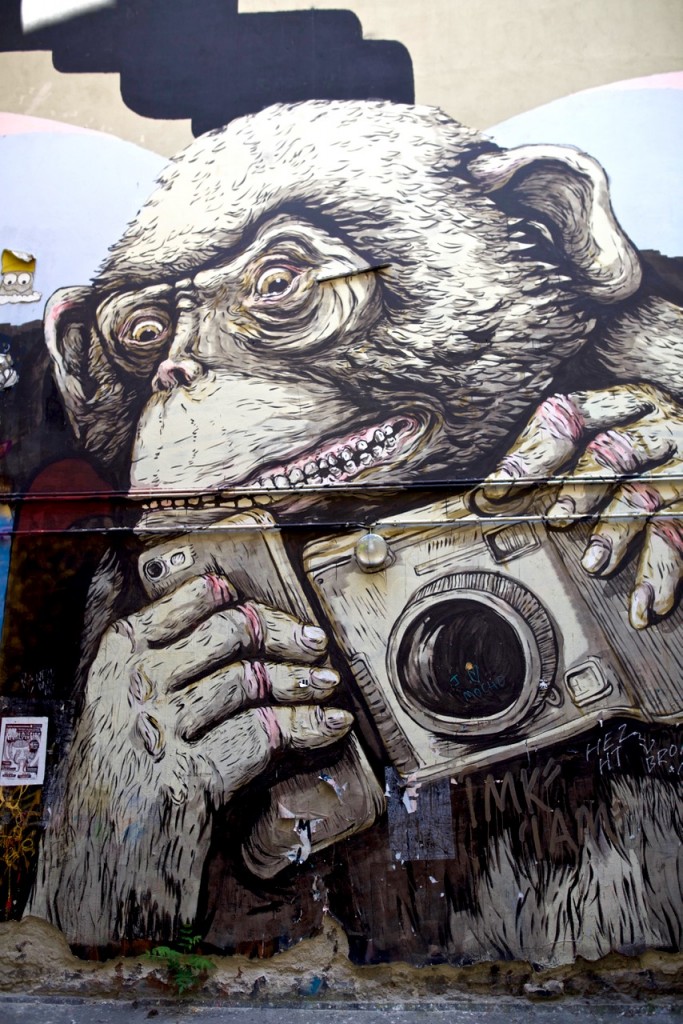 Many people squatted deserted buildings, but once the government was re-established (after an 11 month gap in control) they wanted to take back the occupied buildings. The first attempt lead to so much violence that the government took a slower approach at removing these squatters from their homes.

Over the past 26 years the amount of occupied buildings have decreased significantly but tucked down an alley between modern shop fronts is Hackescher Hof, an area still occupied and home of The Berlin Collective, an International Artist Network. 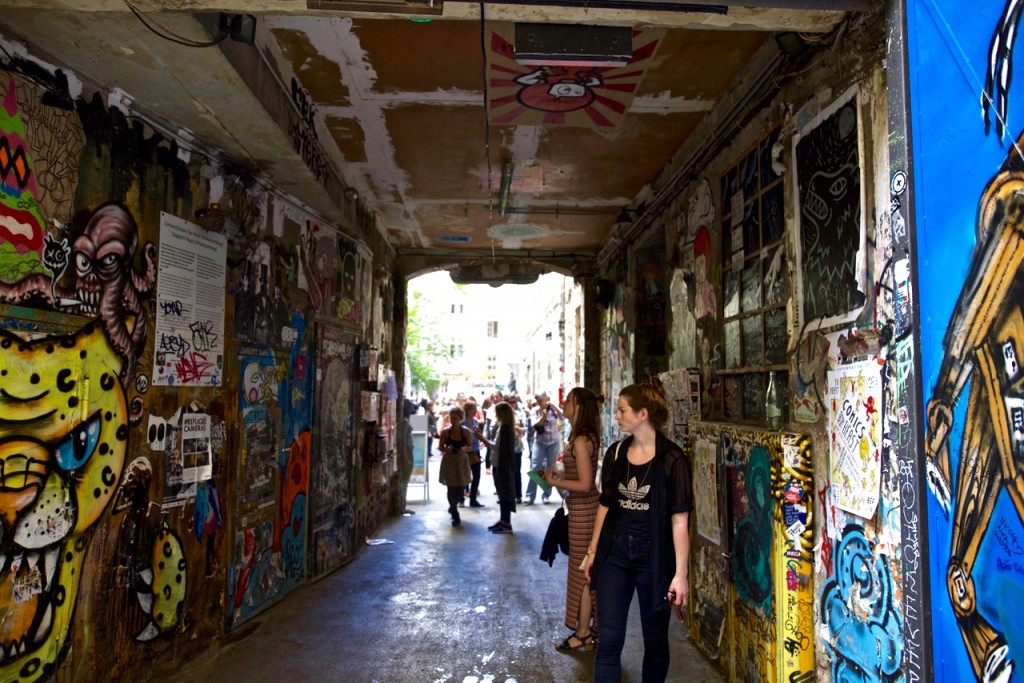 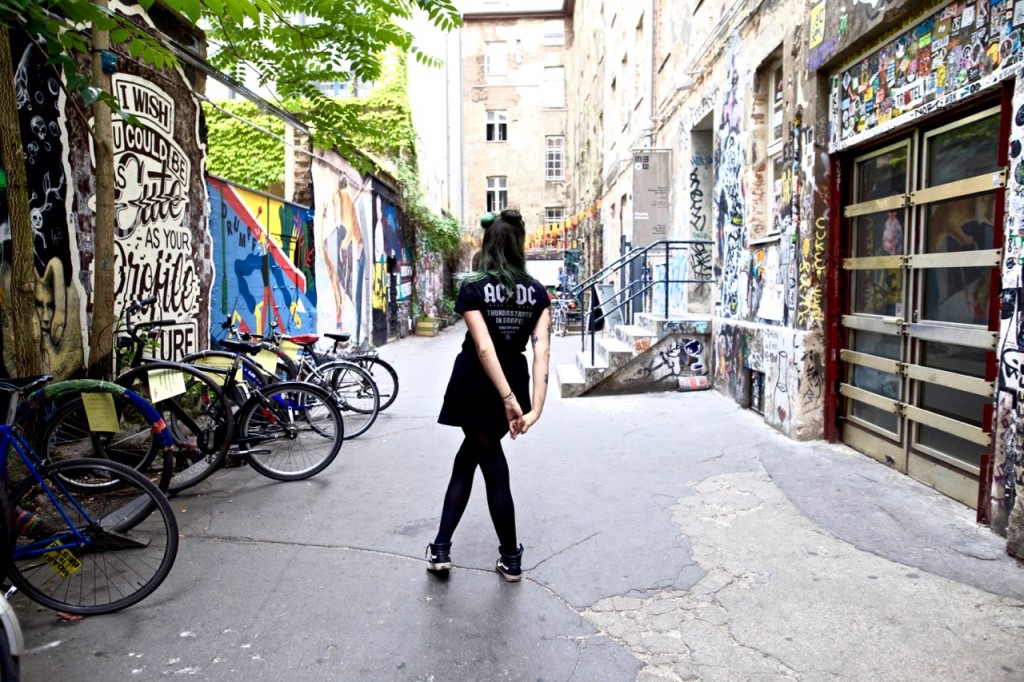 The vibrant art-covered alley is home to various museums, quirky bars, resident artists, and was also the amazing location for this outfit post. 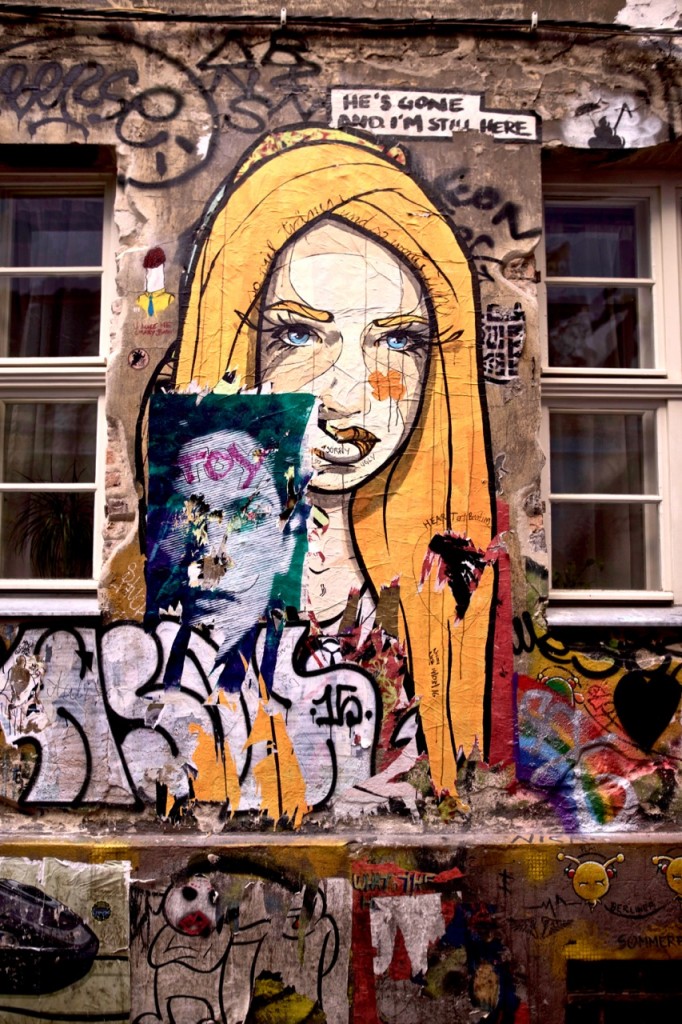 After having a little time to take in some of the street art we hopped back on the train to Kreuzberg, a predominantly Turkish area which was built on a foundation of subcultures including punks, LGBTQ, and bohemians. With such a diverse background it was no surprise that the area was eclectic and filled with edgy independent shops, bars, and eateries – as well as plenty of artwork. 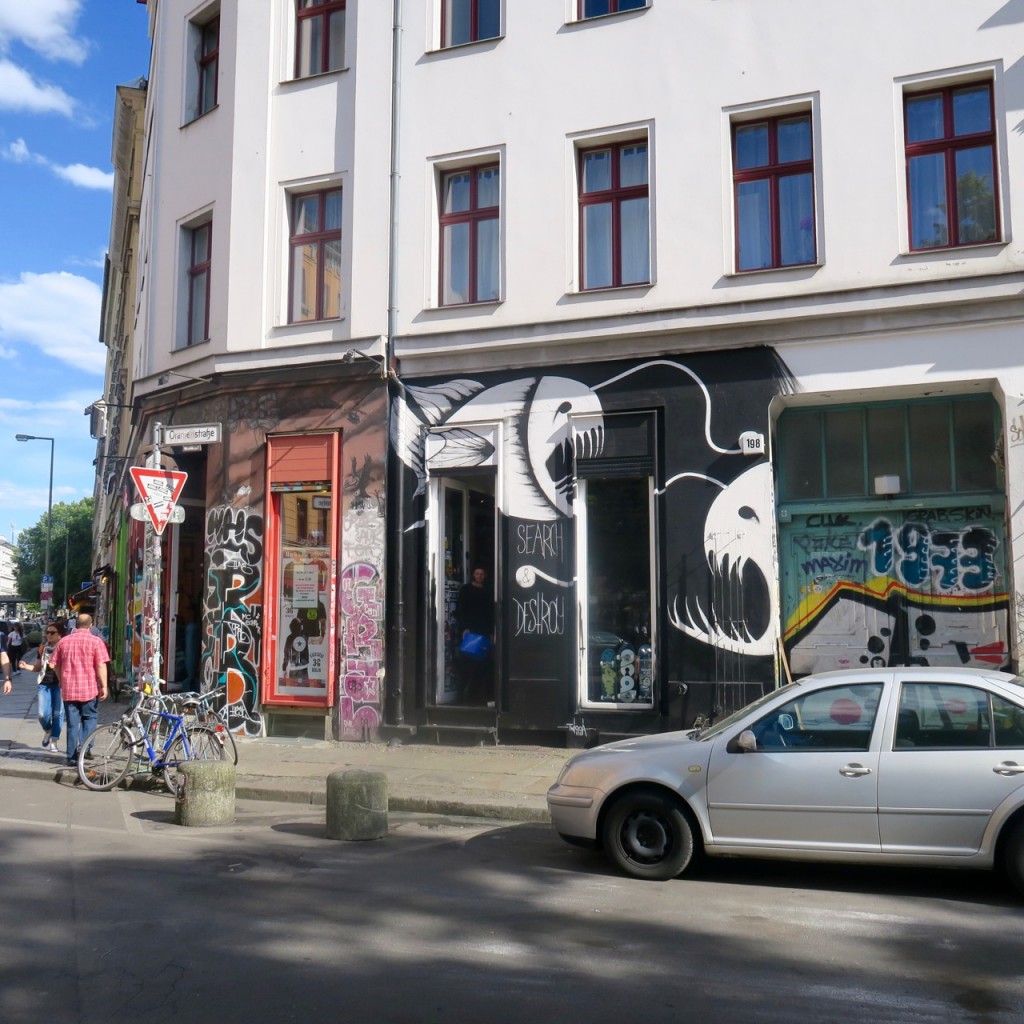 This part of the tour focussed on Graffiti artists, exploring the work of well known names (such as Just) as well as Berlin’s various crews, before moving on to admire Victor Ash’s astronaut mural.

Taking a quick break we reconvened to walk through Mariannenplatz, home to Bethanien – an old hospital turned arts centre. This is also one of the few places where you can get a glimpse of post-war living outside of the tourist traps. After the wall fell many fled the city, leaving their belongings behind – this quick movement included the military. With so many vehicles unattended, and people displaced, communities which repurposed these military machines as homes began to appear through the city. Walking past the small remaining camp was a fascinating glimpse into post-war Berlin. 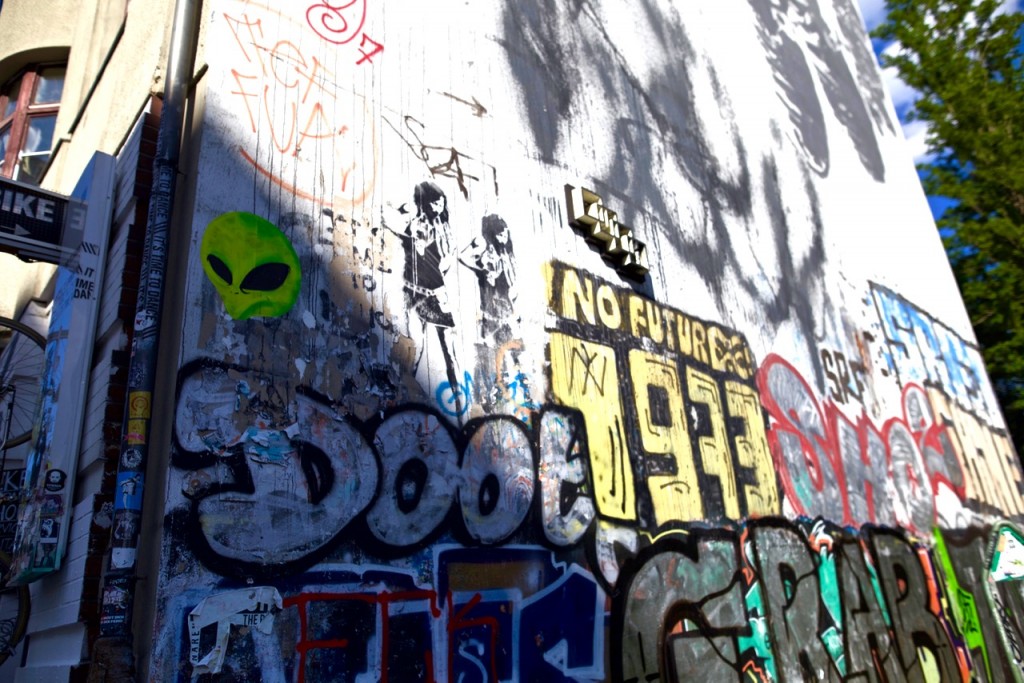 Past grand church St.-Thomas-Kirche we stepped over where the border once was to find a lone, art covered building which has a background story as quirky as the structure itself. The Berlin Wall was constructed in such a rush it had not been curved to accommodate a tiny bend in the border, the piece of land left behind officially belonged to the German Democratic Republic, though it was physically located in West German territory. Due to its unique location neither side took responsibility for it, turning the small area into a dumping ground. Newly retired Osman Kalin took it upon himself to clear the land and build a garden, the project got a little out of hand and turned into what is now affectionally known as “the tree house”. 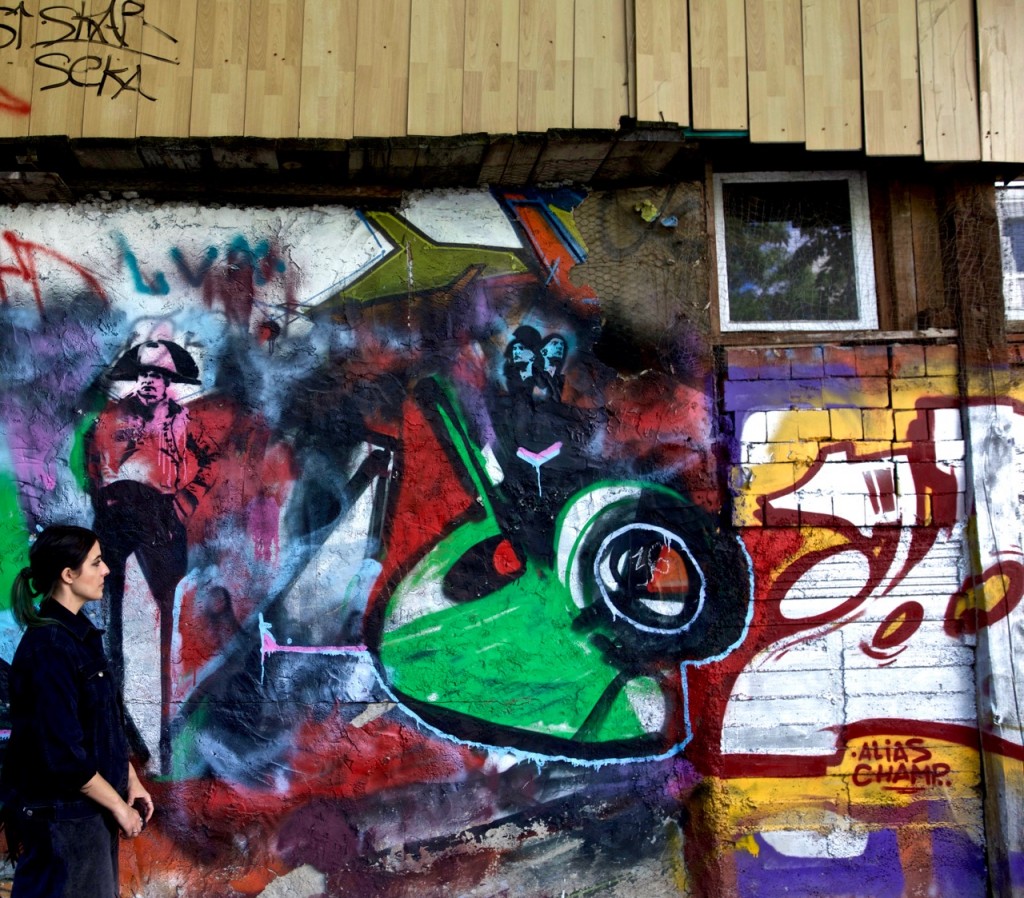 Before we crossed the river the group made one more stop to hear our final factual tale; the day the wall fell due to the blundering politician, Günter Schabowski. 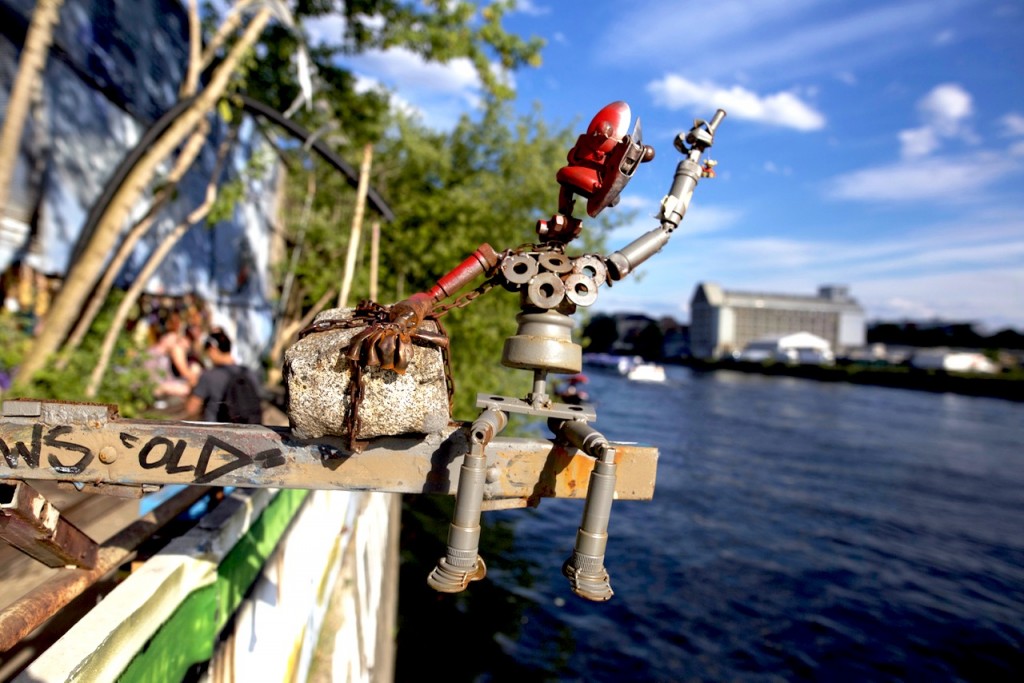 Taking our last opportunity to ask questions we wrapped up the tour over at YAAM (Young African Art Market) Beach, a project that had originally been set up as a youth and cultural centre back in 1994. 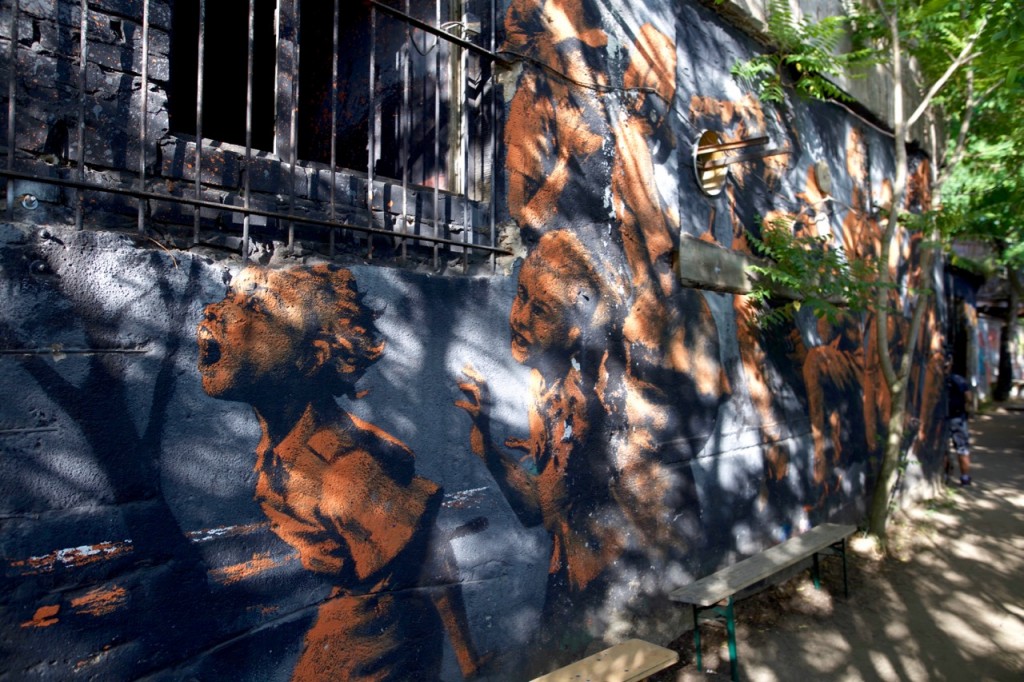 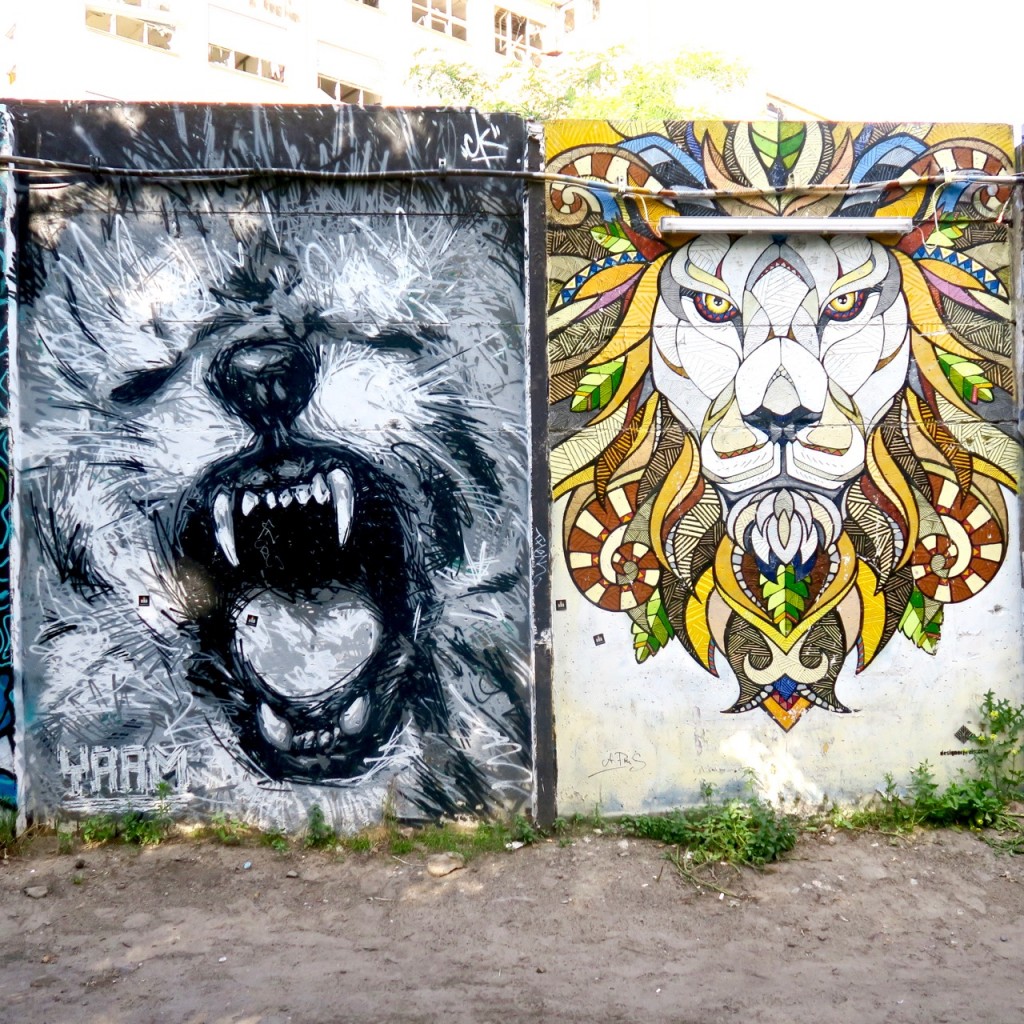 Since its establishment the group has moved location and become a platform and meeting place for musical and art projects as well as a social space with excellent food and a great welcoming atmosphere. We grabbed a beer and browsed the artwork (YAAM is also one of the largest outdoor graffiti galleries in Europe) before eventually putting our feet up for the first time all day. 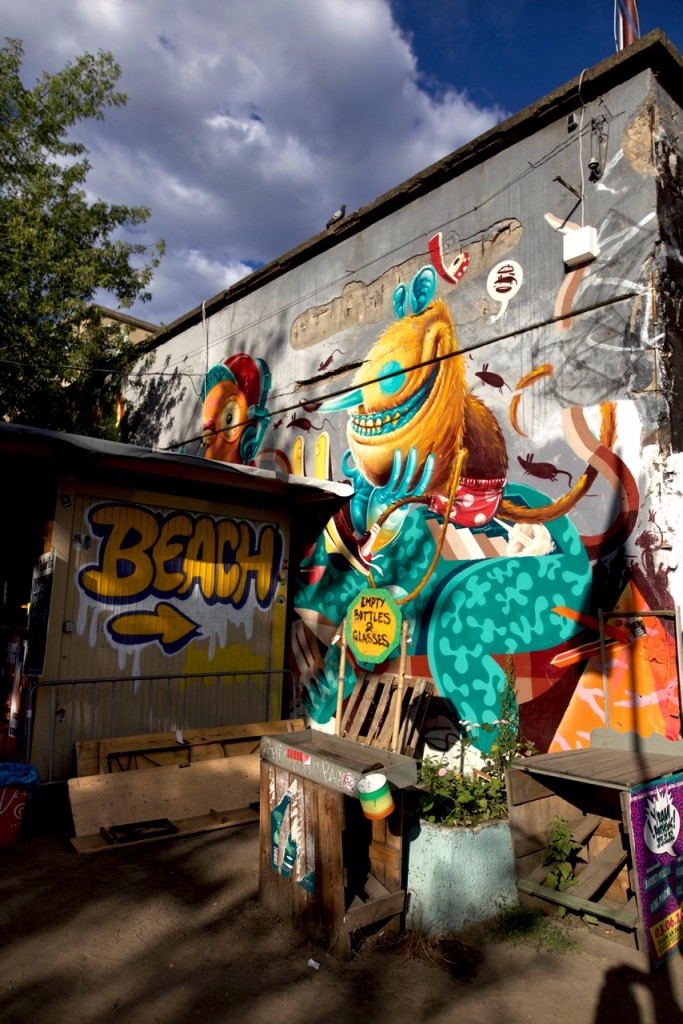 The 3 hour Alternative Berlin tour flew by and was a brilliant balance of Berlin’s history and current alternative culture. Our guide Ru was truly passionate about the city, and hugely knowable about the artists and areas he took us through. He was also willing to go that extra mile, answer questions and give us recommendations for the rest of our stay.

This walking tour is advertised as free but we had such a great experience that we tipped Ru €30 (and would have been more if we were not so poor) I would much rather give money to a company who obviously understand the heart of the city rather than a generic operator. This tour was one of the highlights of my trip and when I return to Berlin I am definitely going to be booking onto their Street Art Workshop.